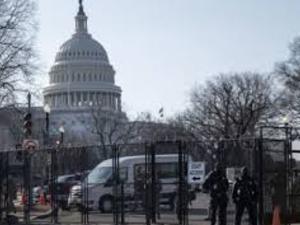 The grounds of the U.S. Capitol were ringed with boosted security Thursday after officials warned of an attack plot by QAnon conspiracists, two months after backers of ex-president Donald Trump stormed the Capitol building.

The House of Representatives cancelled their session and lawmakers were encouraged to stay away following authorities warning that violent militia groups and QAnon followers had discussed attacking the legislature on or about March 4, but by midday the scene was quiet.

There was no sign of protesters as armed National Guard members were deployed in and around the Capitol complex, which has been fortified with high fences topped by razor wire.

The Senate remained in session and many people were still at work in the Capitol complex of buildings, but House Speaker Nancy Pelosi said it "made sense" to reduce activities after the warnings.

"We're way ahead of where we were last time because we have fences and we have National Guard and the rest," she told reporters.

At the same time, she played down their response, saying the House's legislative calendar was accelerated Wednesday to accommodate other activities.

"I don't think anybody should take any encouragement that because some troublemakers might show up that we changed our whole schedule," she said.

Also driving the possible threat is a belief by followers of the QAnon conspiracy theory that Trump could be restored to the White House on March 4, which was the date for US presidential inaugurations before 1933.

In late February some militant groups "discussed plans to take control of the US Capitol and remove Democratic lawmakers on or about March 4," according to the bulletin.

The Capitol Police issued their own alert.

"We have obtained intelligence that shows a possible plot to breach the Capitol by an identified militia group on Thursday, March 4," they said Wednesday.

The warnings said the threats were more "aspirational" than developed.

But FBI and Homeland Security officials have admitted that they were not prepared and did not give adequate warning about the violent January 6 attack on the legislature, which top officials have called an unprecedented insurrection and an "attempted coup" to prevent Biden from assuming the presidency.

Hundreds of Trump backers forced their way into the Capitol, shutting down the process to certify Biden as the election winner.

More than 200 have been arrested and hundreds more are under investigation, including members of extremist groups like the Proud Boys, Oath Keepers and Three Percenters who espouse ultra-nationalist, neo-nazi and white supremacist views.

But security officials also said that the threat is ongoing and not confined to this week.

The bulletin said that the most violent groups have also spoken of using explosives, with Biden's yet-to-be scheduled plan to address Congress a possible target.

FBI Director Christopher Wray told a Congressional hearing that his agents had 2,000 open cases dealing with domestic extremists, double the number from 2017.

While security officials have avoided tying the violence to Trump, who now lives in Florida, they say one driving force remains the unfounded claims that his 2020 election loss was due to widespread voter fraud.

Trump repeated the claim last Sunday in an address to the annual gathering of the Conservative Political Action Conference.