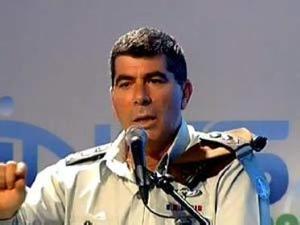 Israel's former army chief Gabi Ashkenazi said Thursday that no Sunni-led government will ever go as far with Iran and Hizbullah as Syrian President Bashar Assad did.

During the conference, which was organized by the Institute for National Security Studies in Tel Aviv University, the former army chief said that “there were vast and untrue estimates stating that the primary country equipping Hizbullah with weapons is Iran, while the truth was that Syria is equipping Hizbullah.”

Syria has been witnessing an unprecedented uprising against the regime, which has killed more than 5,400 people according to the U.N., and tens of thousands have been detained according to the Syrian opposition.

Hizbullah has voiced its support for the regime and claimed that Syria was being faced with an international "conspiracy."

Ashkenazi stated: “It is possible that a non-effective regime might be established in Syria, or a civil war might erupt, or it would be a failed state, and this would put us in front of a difficult challenge.”

“Contrary to Egypt, the Syrian army is fighting for its life,” he continued.

Israel cant be fought militarily right now, with US backing them. Arabs tried and failed. Then there was only Hezb. Iran and Syria didnt do anything. Iran never fired a single bullet at israel! They use lebanon..its time to wake up.
Diplomacy, as shown by the palestinians, can be effective. Israel cant hide its crimes, just like the arab dictators. We need to use the pen against the sword, since we only have a gun against israel's fighters. This is not cowardice, just being realistic..

Israel loves Assad and like hizboulla will try and protect him. I bet he'll end up either dead or refuge in Israel...let's see what the Hizbos will do then.

jabalamel, is this one of guys paying you and your boyfriend for information on the Zionist infested bee3at al hadinat party?

Israel, Iran and Syria are enemies of Lebanon and can be delt with. The problem is the enemies within. The filthy militia.

yes not hard to see that you have been buddies with saudi and qatari bedouins for a long time. Sad that the slafis and brotherhood forgot what you have been doing to the palestinian. And the methanol loving gulf bedouins really never gave a hoot about any palestinian to start with.

Michel, Can you guarantee to the shiites in the south that israel will not be wanting more land in the future? Whose stopping them from building more settlements and kicking out more palestinians from west bank and quds/Jerusalem? I did not see any pens stopping them for the past 60+ years either. I am anti-war but cannot tell people in the south what to do and force my anti-war message upon them. It is not my personal house or land that israel will be taking.

This is another proof that the Sunni crazies, aka Al Qaida a-la-carte and Hariri's Christian Sunnis are the best friends of the US and Israel, and of course of the low lives in Qatar and Saudi Arabia. After all, they created the crazy Sunnis (aka Al Qaida a-la-carte), funded and continue to fund them, train them, arm them, design the plots for them, use them and then punish them if they veer off the drawn path?

former chief of zionist genocidal militia is hallucinating about syrian army fighting for it's life.
if zionists really believed in that, they would attack syria by now

Next time Israel needs to focus bombing on the camel neighborhoods. Don't drop any papers ahead of time this time. The rest of Lebanon will not care. We are tired of paying their electric bills and being threatened by them.

They think they are equal when they demand living like beggars. Get rid of them all.

THIS IS BEYOND ABSURD!

You really think diplomacy was effective for the Palestinians?

NOTHING PAYS OFF BUT THE BLOOD OF MARTYRS BY WHICH HISTORY BOOKS ARE WRITTEN!

@arzz
Well until our civil war, we were fine..when we fought our brothers, we invited trouble, whether from syria or israel..no one can deny that..conclusion, lets unite and stay out of this..were a small country with 3 million..lets not fight other peoples' fight..Palestinians arent fighting israel anymore, why should we!

We should force anti-war message on everyone!! ur memory is short..hassan forced and still forces his war messages on all lebanese, including shiites who just wanna live in peace! Lets be fair abt this..

And dont say israel then can attack..anti israel weapons (palestinians/hezb) allowed israel to invade and bomb ua..where were they before 82!! And yes, we invited them, but no one wants to repeat those mistakes..as long as hezb are inviting iranian interference, the other camp will find its own devil..its as simple!

@cookie
Cannot happen..will happen once america is not the superpower it is..could anyone defeat alexander/rome/muslims when they were at their most powerful

Saudi etc etc have no interest in fighting israel..why would they..iran wants to make it look like they can fight israel (they dont..its just an excuse..even if they get nuclear weapons) they know pretty well that any coalition thats even close to defeating israel will be annihilated by US

So yeah, i dont wanna fight israel..so what..like i dont wanna fight Hezb or some bully, considering theyre more powerful..doesnt make me a coward, unless my life depends on it, or my dignity is soiled..
Yes we were humiliated by iarael and syria, but its nothing diplomacy cant take care of, if our rights are given back and guarantees made..this is not kindergarten! We should think like adults..violence has shown that its never the answer, at least not the solution

Once Syria loses physician security of his country, then that opens up the flank along the Lebanon Syrian border. While the Pentagon and other studied what they believed to be an Israeli defeat in 2006. (I disagree, objectives were met), the key issue was in Lebanon it was a frontal invasion a frontal assault, a modern version of trench warfare, similar to the Iran/Iraq war or WW1. If you take OP Cast Lead as a live fire exercise and Gaza Strip a mock up of Lebanon. You can see how using multiple flanks can defeat the enemy. Gaza City encirclement (Beirut), Beit Hanoun, Beit Lahia, Al-Atatra (South of the Litani, rocket launching sites), Rafah (Northern Lebanon, Bekaa Valley.

Also using multiple smaller faster moving columns of mechanized units, creeping artillery and air strikes. Gaza you can pound for at least a week with air power and then artillery, naval assets. Lebanon due to the increased range of rockets need to be hit hard quickly in a combined blitzkrieg. Once the ground operations start air power in Cast Lead was different from 2006. So Lebanon requires to facets of shock and awe and creeping air support all at the same time, unlike Gaza. In which module one phase one shock and awe then module one enters phase 2 air support.

If I was Hassan I would be very concerned. As Assad loses control of more areas to the FSA, Hizbullah will be forced to fight on two fronts, thinning out their force structure inside Lebanon, at present as the Lebanon AO is quite they can meet that task. This occur in 2006 when they had to redirect forces back from Iraq to Lebanon. It also opens up the Lebanon Syrian border to the IDF that will be able to walk right in, at present Assad is not capable of suppressing both the uprising and fighting a conventional war, that situation will only get worse for Assad and Hizbullah. That is the key to defeating Hizbullah. They are all dead, in my humble opinion. And with Assad gone the supply of logistics will dry up so as it takes Hizbullah 5 to 6 years to rearm once it's capability has been deconstructed. This time the supply of logistics will not be there, also with the deconstructed physical security of Syria the supply of logistics to the Lebanon AO (safe haven, arms caches) is gone.

No not now patience, I am a sniper I piss myself, shit myself, have snakes, spiders, bugs crawl over me, make a 48 hr rat pack last one month at a time all for one shot. The end is near.

habal be patient your time and hassouni is up very soon. just wait

Let bygones be bygones..if palestinian are negotiating with israel..why should our position be to fight them constantly
israelis harmed palestinians way more than us, yet they negotiate..and dont get me that hamas shit, hamas just wants to be recognized and invited to those negotiations..and israel uses hamas as an excuse to play hardball

We need to go back to pre 1975 and learn from the mistakes to do better..EVERYONE made mistakes, people need to move on!

Driving all the Christians out of the Mid East, because the Pope said THE vp'S DAUGHTER CANNOT EAT PUSSY. I am just showing the pope I am the real deal. Hell I will show the world hell. I took a weak off, the popes statements I am not interested. I eat, sleep, shit you, for 29 years.

The IRGC know were to find, me come, I will fucken kill ya,

Let's add maakroot to the list of predictors, which includes Gabby, peace, thepatriot, allouchi, chab and the dumber of all and of all times Dr. Samir Hezzez, all of whom have been predicting things that have proven to...blah...duh...umm...oh... FAIL? But they keep at it and with more vigor! Nobody wants these predictions to actually not fail more than I do, but... YA FRIGGIN 3EIN, enough already. Just come back down to earth please.

shab, thank you for dealing with Israel. Or did you? Or did the UN? :)

@yando
What exactly have I predicted clever boy??

allouchi now focuses his predictions on people who comment on Naharnet and gets abusive too! Now that's a whole new field of predictions for the great beyondo allouchi. we sick of you? shit the H$LL up? Relax buddy. Don't get angry. Some people are incapable of appreciating your skills at predicting. Just look at what happened to Nostradamus, and he was half as bright and one third as correct as you. Just relax.

Guys all those weird names like Someone, yando, frugalo, i dont know what else, is in reality " Le phenicien " thats using the same filthy language all the time that is why its so easy to recognize him but he is such a moron that he uses the same language which is easily detectable. So dont answer similar like comments please, you are giving importance to a 12 year old happy changing nicknames because of he's trying to developp his personality in his now to be teenage years :)

Michel, You misundertood me. I am saying that one cannot justly ask HA to not have weapons in order to defend their land from Isaeli's. Again, what guarantee do you have that Israel would not want more land in the future? Who is stopping them from doing that in west bank and Jerusalem? who should stop them in the future? Lebanon is the weakest and best land available for future expansion.