Emblems of a City, the Bats of Abidjan Face Troubled Future 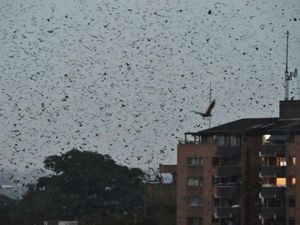 At evening's twilight, the skies over Abidjan's business quarter are darkened by bats squeaking their way between buildings, flying across Ivory Coast's economic hub in the tens of thousands.

The scene has long been a feature of the city's Plateau district -- in the dying embers of the sun, the beating of innumerable little wings almost drowns out the traffic noise.

But the little mammals are now threatened by a range of human-made perils, say conservationists.

After roosting through the day hanging from the majestic trees lining the avenues of the Plateau, the bats take flight, sometimes with their young tucked under their wings.

They head for the Banco forest, a primeval terrain of 3,474 hectares (8,584 acres) on city ground about 10 kilometers (six miles) away, which was first given the status of national park under French colonial rule in 1953.

There, the bats gorge all night on insects, fruit and flowers, says Magloire Niamien, a biologist at the University of Korhogo in northern Ivory Coast.

Niamien is a specialist in the chiroptera (bats) order of Abidjan, which are among roughly 1,000 species around the world.

Niamien reckons the city's bat population may have been as a many as a million a year ago but has since drastically declined because of urbanization and poaching.

There are no reliable figures because of a lack of studies.

But Niamien notes that the straw-colored fruit bat, the commonest species on the Plateau, has been categorized as a "near-threatened" species by the International Union for Conservation of Nature (IUCN) -- a clear indicator of a worrying fall.

"Up to half the population of bats appears to have migrated elsewhere," says Professor Inza Kone, who heads the Swiss Centre for Scientific Research in Ivory Coast.

Bats have a creepy reputation among some humans, but scientists stress the creatures play a crucial part in the food web on which we depend. They notably tuck into crop-eating insects, saving farmers billions a year in pesticide costs.

But in Abidjan, cohabitation between bat and human has been difficult.

Some people complain the bats make too much noise with their strident squawks, even in daytime, while the creatures also seem to have an eerie ability to target cars with their droppings.

Petitions have been raised to demand action by authorities and trees have been deliberately cut down to make the bats go, says biologist Blaise Kadjo, a specialist in mammals and professor at the Felix Houphouet-Boigny University in Abidjan.

People are also afraid of bat-borne diseases, as the flying mammals are known to harbor pathogens, especially viruses, that are harmful to humans.

But this risk rises greatly when bats are hunted and butchered for food or when humans encroach on their habitat -- Ebola is one suspected microbe that jumped the species barrier this way.

"There was a big scare during the Ebola epidemic in West Africa in 2014, and fears resurfaced with the coronavirus pandemic," says Kadjo.

"But we have never recorded a single health incident connected to the bats on the Plateau. We carried out tests in 2014 and didn't find any trace of Ebola."

Despite the risks from "bushmeat," bat eating remains quite common.

At the Siporex market, in the large working-class Yopougon district of Abidjan, three smoked bats are sold for 2,500 CFA ($4.56 / around four euros).

Hunting for bats on the Plateau mostly takes place on weekends, when the offices and schools are empty, and poachers can work in peace.

Scientists are pressing Ivorian authorities to act to protect bats.

Quite apart from their ancient presence and their acquired status as a symbol of the Plateau, bats play an important ecological role in fertilizing many plants.

"They eat a lot of fruit, swallow the seeds and then defecate them while flying, thus allowing dissemination," Kone explained.

"They also eat flowers, spreading pollen from flower to flower," like bees.

Bats are one of the few creatures capable of ensuring the reproduction of iroko, a large hardwood tree whose wood is sold worldwide to make luxury furniture, but threatened by overexploitation in west Africa, Niamien said.

"Their role is essential for maintaining the natural ecosystem," says Kadjo, who, along with his colleagues, hopes for public funding to continue studies on bats and raise awareness about their importance.