Nasrallah: Actions in Egypt are No Less Important than Victories in July and Gaza Wars 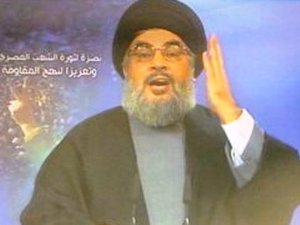 Hizbullah Secretary General Sayyed Hassan Nasrallah stressed on Monday that the party will not interfere in the protests in Egypt.

He said during a popular gathering in support of the Tunisian and Egyptian people: “We cannot stand idly by when the dispute is between the oppressed and the oppressor.”

He explained that the party’s delay in issuing a stand over the developments in the two Arab countries was not out of confusion or hesitation, saying: “Had we made our stand earlier, people would have said that the protesters were being backed by Hizbullah, Hamas, or Iranian Revolutionary Guard cells.”

Addressing the discovery of a Hizbullah cell in Egypt in the past, he stated: “When our brothers, who were working with a small number of Egyptians and Palestinians for Gaza, were arrested, it was accused of seeking to topple the Egyptian regime.”

The U.S. is trying to take advantage of the revolution in order to improve its ugly image after decades of supporting the worst dictatorships the world has ever seen, he added.

Nasrallah pointed out that the American administration had conducted several studies in the Arab and Islamic worlds the results of which have revealed the overwhelming majority oppose American policies.

Furthermore, he rejected claims that the movements in Tunis and Egypt were being backed by the U.S., stressing: “The revolution is the revolution of the poor, the free, the students, and those refusing to be humiliated … Muslims, Christians, Islamic, intellectual, and secular movements are taking part in it.”

He added that there is an Israeli consensus seeking to protect the Egyptian regime because the “American administration is concerned with protecting its and Israel’s interests.”

In addition, Nasrallah emphasized that should the protesters succeed, “then their victory will completely change the face of the region.”

“The Egyptian people’s actions are no less important than the resistance movements’ victories in the July and Gaza wars,” he stated.

He concluded by saying that the party places all its capabilities in the hands of the Egyptian people.

Hizbullah -- which opposes the 1979 peace treaty between Egypt and Israel -- has had strained ties with Cairo for decades.

The armed Shiite movement sparked the ire of Mubarak in late 2008 by accusing Egypt of complicity with Israel -- with which Hizbullah fought a deadly 2006 war -- during the Israeli offensive in the Gaza Strip.

Egyptian courts last year sentenced 26 people for allegedly planning attacks on behalf of Hizbullah, which was seen as retaliation for its criticism of Mubarak.

The arrests soured relations between predominantly Sunni Egypt and Shiite Hizbullah's backer Iran, with Cairo accusing Tehran of using the movement to gain a foothold in Egypt.