Gemayel: Cabinet Negotiations Have Reached Dead End, But Our Hand Still Extended to Other Camp 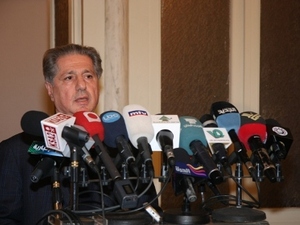 Phalange Party leader Amin Gemayel announced on Monday that the negotiations over the formation of a new government have reached a dead end, "but our hand is still extended to the other camp."

He said during a press conference: "Since the start of the crisis, we have extended our hand to all sides and we have given Prime Minister-designate Najib Miqati an opportunity to form a government of national partnership."

"We were the first to take the initiative and seek to coordinate with our allies in bridging the divide in the country by adopting openness and moderation that Miqati demonstrated in his appointment as premier-designate," he noted.

"However, after days of contacts with our allies, it became apparent to us that despite Miqati's good will, impossible conditions that contradict with the necessities of national partnership were imposed on him, the thing that has led us to a dead end," he stated.

"We announce that the March 14 camp has not reached a solution after all the good intentions we have demonstrated and our acceptance of the new majority," he continued.

"Let them form a one-sided government if they want to, but we don't know just how much this will help the country" given the developments in the region, Gemayel said.

Furthermore, he stressed that Hizbullah is probably the main side that is controlling the course of developments in Lebanon.

He concluded by asking House Speaker Nabih Berri to justify the use of weapons on the domestic scene in Lebanon and the resignation of opposition ministers from Cabinet, two moves that contradict the Doha Agreement.