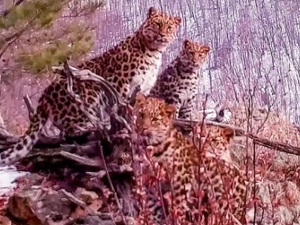 Russian conservationists hailed Friday a rare sighting of an Amur leopard mother with three cubs in the Far East as proof of the efficiency of the country's efforts to boost the population of the endangered species.

Scientists in a Russian national park located in the Primorye region on the border with China obtained the stunning images using a remote camera trap.

The video footage shows the feline family standing on top of a hill in the Land of the Leopard National Park.

In the video, the young mother, identified as Leo 117F, is seen spotting a mystery animal and then leaving the scene, apparently walking closer towards it.

Soon her cubs also discover the animal and begin to watch their mother's interaction with the "intruder" intently, the park said. None appeared to be afraid.

Ivan Rakov, spokesman for the national park, said it was the first time that Leo 117F, who is believed to be four years old, had been caught on video with her cubs.

"We've discovered that she has been able to raise a family," Rakov told AFP from the Pacific port city of Vladivostok.

"This is her first litter."

He said raising three cubs at once in Russia's taiga was no mean feat and required a "lot of space and a lot of food."

Amur leopards are considered to be the rarest of the world's big cats. They can climb trees and their spot patterns are unique like people's fingerprints.

Rakov said the video footage showed that the fight against poachers and a series of other steps taken in recent years to boost the population of the threatened species had borne fruit.

Over the past 20 years the number of Amur leopards in Russia has grown to around 100 from 35.

"This is one more piece of evidence that measures taken by the Russian state to preserve the world's rarest big cat are working," Rakov said.

The population of the big cats had returned essentially "from the dead."

"There are now much fewer poachers," he added.

Rakov said that about 40 of the animals have "dual citizenship" and roam freely between Russia and China.

Established in 2012, the national park is also home to other big cats including the Amur tiger and the lynx.