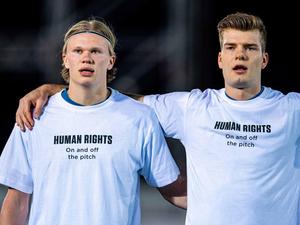 Denmark on Sunday joined Norway and other European national teams in a growing movement protesting against the treatment of migrant workers involved in building venues for the 2022 World Cup in Qatar.

Danish players wore jerseys with the slogan "Football supports CHANGE" as they lined up for a photograph before their World Cup qualifier against Moldova, with the Danish Football Union saying the shirts would be put up for sale and the money given to migrant workers in the Gulf state.

Players from Germany and the Netherlands have also protested in recent days as the European qualifying campaign begins for the 2022 tournament, the hosting of which was controversially awarded a decade ago to Qatar.

Norway players, including superstar striker Erling Braut Haaland, donned t-shirts with the slogan 'Human rights, on and off the pitch' prior to their game in Gibraltar on Wednesday.

Germany players then undertook a similar action before taking on Iceland the next day, lining up in T-shirts which spelled the message 'Human Rights'.

"We have the World Cup coming up and there will be discussions about it... we wanted to show we are not ignoring that," said Bayern Munich midfielder Leon Goretzka.

"We have a large reach -- and we can use it to set an example for the values we want to stand for."

The Dutch team joined in prior to kick-off in their game against Latvia in Amsterdam on Saturday and the movement raises the question of whether players, or national federations, would be prepared to actually boycott the World Cup.

Several Norwegian clubs had already spoken out in favor of a boycott before their national team's action. The Norwegian Football Federation is expected to debate the issue at a special congress in June.

"It is 10 years too late for a boycott. We should have thought about that at the time" the World Cup was awarded to Qatar in 2010, admitted Bayern and Germany midfielder Joshua Kimmich.

Indeed Belgium coach Roberto Martinez believes a boycott "is not the solution. That would just be turning our backs on the problem."

Qatar has faced criticism for its treatment of migrant workers, many of whom are involved in preparations for the World Cup, with campaigners accusing employers of exploitation and forcing laborers to work in dangerous conditions.

However, Qatari authorities insist they have done more than any country in the region to improve worker welfare and say they have "always been transparent about the health and safety of workers".

"Since construction began in 2014, there have been three work-related fatalities and 35 non-work-related deaths," a spokesman for Qatar's Supreme Committee for Delivery and Legacy claimed in a statement.

Organisers insist a first World Cup in the Arab world has already brought "significant benefits to workers" including improved accommodation facilities and a guarantee to reimburse more than $30 million in illegal recruitment fees to workers.

There are contradictions within the protests themselves, with several German internationals playing club football for Bayern, who have a sponsorship deal with Qatar Airways and have regularly visited the country on training camps.

It would be awkward to say the least for any Paris Saint-Germain player to be involved in the various national team protests given the French champions are owned by Qatar.

The movement could nevertheless become especially awkward for FIFA if it continues to spread, although world football's governing body says it will not stop protests.

"FIFA believes in the freedom of speech, and in the power of football as a force for good. No disciplinary proceedings in relation to this matter will be opened by FIFA," it told AFP.

Meanwhile the stance taken by the Norwegians and others has been praised by advocates on the rights of migrant workers in the Gulf.

"It's very commendable of these teams to take a stance and I think they're doing it in a way that's respectful and positive," said Nicholas McGeehan, a researcher at labor rights campaign group Fair Square.

"I think anyone who genuinely cares about the game and the issues these players are raising would agree that what's happening is extremely positive."