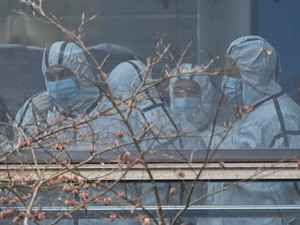 An international expert mission to Wuhan concluded in a report seen Monday that Covid-19 likely first passed to humans from a bat through an intermediary animal, with investigators all but ruling out a laboratory leak.

The intermediate host hypothesis was deemed "likely to very likely", while the theory that the virus escaped from a lab was seen as "extremely unlikely", according to a copy of the long-awaited final report obtained by AFP before its official release.

The report comes as dramatic infection spikes in Europe have forced a tightening of unpopular restrictions across the continent, and amid warnings that the United States could suffer a similar surge if curbs are eased too quickly.

In sharp contrast, people in England were set for what newspapers dubbed "Happy Monday", with stay-at-home orders relaxed as rapid vaccinations appeared to drive down infection rates there.

As countries rush to vaccinate and stem the spread of Covid-19, the mystery at the very heart of the pandemic -- how the virus that causes the disease first jumped to humans -- remains unsolved.

The report from the international mission to Wuhan has therefore been keenly anticipated ever since the expert team left China more than a month ago.

Delays in the publication of the findings, drafted in collaboration with the team's Chinese counterparts, had been blamed on coordination and translation issues, even as a diplomatic tug-of-war raged in the background over the report's contents.

The repeated delays sparked renewed criticism of the UN health agency's slow actions in getting the team to Wuhan in the first place.

The experts tasked with probing Covid-19's origins only arrived there in January, more than a year after the first cases surfaced in the Chinese city in December 2019, sparking fears the trail had gone cold.

In the 15 months since the coronavirus emerged, the pandemic has engulfed the planet, killing nearly 2.8 million people and shredding the global economy.

During a lengthy press conference in Wuhan on February 9 at the end of the mission, the experts and their Chinese counterparts made clear that they could not yet draw any firm conclusions.

But they said they had worked to rank a number of hypotheses according to how likely they were.

Experts believe that the SARS-CoV-2 virus that causes the Covid-19 disease originally came from bats.

One theory examined was that the virus jumped directly from bats to humans. The final report determined that this scenario was "possible to likely".

A more likely scenario, the report found, was that the virus had first jumped from bats to another animal, which in turn infected humans.

"Although the closest related viruses have been found in bats, the evolutionary distance between these bat viruses and SARS-CoV-2 is estimated to be several decades, suggesting a missing link," the report said.

"The scenario including introduction through an intermediary host was considered to be likely to very likely," it said, although it did not conclude which animal may have first allowed the virus to jump to humans.

The report meanwhile did not rule out transmission through frozen food -- Beijing's favoured theory -- since the virus appears to be able survive at freezing temperatures, saying that "introduction via cold/ food chain products is considered possible".

Finally, the report examined the idea of a lab leak from, for instance, the Wuhan Institute of Virology -- a theory promoted by former US president Donald Trump's administration.

It pointed to the fact that there was no record of any virus resembling SARS-CoV-2 in any laboratory before December 2019, and stressed high safety levels at the labs in Wuhan.

"A laboratory origin of the pandemic was considered to be extremely unlikely," the report said.

Already during the Wuhan press conference, the experts had said the lab-leak theory was considered the least likely.

But back in Geneva, WHO boss Tedros Adhanom Ghebreyesus had then insisted following the mission that all hypotheses remained on the table, and the organisation has urged patience as work continues to get to the bottom of the Covid origins mystery.

The experts also concluded their report with a call for "a continued scientific and collaborative approach to be taken towards tracing the origins of Covid-19".

Determining the source of the pandemic is deemed vital to better protecting against future outbreaks.