Most Markets Rise in Asia on Recovery Optimism, Worries Remain 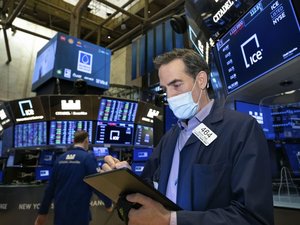 Most Asian markets extended gains Tuesday following another record on Wall Street though investors remain torn between vaccine-fuelled optimism over the economic outlook and fears over a surge in inflation the recovery is expected to bring with it.

With a number of big data announcements coming this week, analysts said traders were largely biding their time awaiting the next catalyst to drive buying, though most tip the year-long rally across equities to continue this year despite recent stutters.

The major call is Friday's government employment report, which will give the latest snapshot of the world's top economy as it slowly emerges from the crisis, while private jobs and unemployment claims are also due, along with readings on manufacturing activity.

"With a lot of growing optimism in the price, economic data will need to do much heavy lifting in the future," said Stephen Innes at Axi. "And as we all know, nothing is a sure bet in the markets, especially when it comes to banking on lofty economic data expectations."

Also in focus is Joe Biden's much-anticipated infrastructure bill, which is tipped to be worth $3 trillion -- some reports have suggested $4 trillion -- and which follows just months after his vast stimulus package.

The expected spending spree by the US government comes as the president pledges that 90 percent of American adults will be eligible for vaccination by April 19. Meanwhile, his goal of getting 200 million people jabbed within his first 100 days also appears to be well on course.

Innes added that with the Federal Reserve promising to keep monetary policy ultra-loose -- and interest rates at record lows -- for as long as needed, markets could be in for another strong advance.

Still, the threat that the economic reopening will see a huge jump in spending continues to weigh on market sentiment as traders fret it will force the Fed to tighten its belt earlier than 2024, as flagged.

US inflation remained stabilised for now, with data last week coming in below expectations.

But markets analyst Louis Navellier said: "China is starting to raise the price of some of their goods, so that we do have inflation out there brewing. And it's going to be very, very interesting, because raw commodity costs like copper and everything are going up as well."

"The ongoing smooth vaccination in the US and extensive fiscal support is lifting the growth outlook, and with it, inflation expectations," she said.

The rise in yields "has not led to flows out of equities. The fundamental support for risk assets is in place."

Observers were tracking the fallout from the sale of billions of dollars' worth of stock by troubled US fund Archego, which left several creditor banks exposed to huge losses, including Nomura of Japan and Switzerland's Credit Suisse.

Nomura was down around three percent in Tokyo, a day after plunging 16 percent.

Oil investors were awaiting Thursday's meeting of OPEC and other major producers as they discuss output, with market-watchers tipping them to maintain the status quo following recent price volatility and concerns about demand, particularly from Europe.

Crude initially tumbled Monday on news that traffic resumed on the Suez Canal after a massive container ship blocking the waterway was freed.