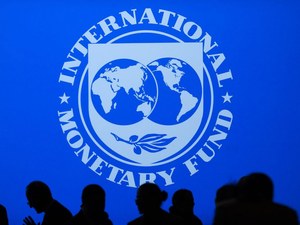 Economic growth led by the United States and China is accelerating, amplifying the risks of an uneven global recovery, the head of the IMF said Tuesday.

"In January we projected global growth at 5.5 percent in 2021," said IMF Chief Kristalina Georgieva in an address ahead of the body's annual spring meeting cohosted with the World Bank.

"We now expect a further acceleration," she said ahead of the international organization's official update of its forecast in a week.

She also praised the "extraordinary effort" of workers throughout the health care universe, including doctors, nurses and vaccine scientists.

Governments played a key role in averting a worldwide depression, Georgieva said, with some $16 trillion in fiscal support and a "massive liquidity injection by central banks" averting complete disaster.

Without these steps, the worldwide economic contraction of 3.5 percent in 2020 "would have been at least three times worse," she said.

But the IMF is seeing increasing signs of a "multi-speed recovery" powered by the United States and China, which are on track to enjoy growth by the end of 2021 that outpaces their pre-crisis performance.

In general, the global outlook remains clouded by "extremely high uncertainty," with economic activity still tied closely to the pandemic.

"So much depends on the path of the pandemic -- which is now shaped by uneven progress in vaccination and the new virus strains that are holding back growth prospects, especially in Europe and Latin America," she said.

"Many are highly exposed to hard-hit sectors, such as tourism," she said. "Now they face less access to vaccines and even less room in their budgets."

A keen worry in a global economy fractured by different-paced recoveries would be a sudden rise in U.S. growth that leads to a jump in interest rates and capital flight from emerging regions.

"We expect inflation to remain contained, but faster US recovery could cause a rapid rise in interest rates, which could lead to a sharp tightening of financial conditions -- and significant capital outflows from emerging and developing economies," she said.

Georgieva urges generous investment in the production and distribution of vaccines to facilitate the transition to the post-Covid economy.

She also backs increased investment for the most vulnerable countries, as well as spending on infrastructure, health and education so that "everyone can benefit from the historic transformation to greener and smarter economies."

This group of nations requires $200 billion over five years to overcome the pandemic and another $250 billion to return to a trajectory of meeting richer countries, said Georgieva, citing a recent IMF study.

The IMF has already provided $107 billion in financing and debt service relief for the 29 nation poorest nations. This includes support for sub-Saharan Africa at about 13 times the level previously.

Support within the international organization is also building for lending some $650 billion in special drawing rights to aid the most vulnerable nations, she said.