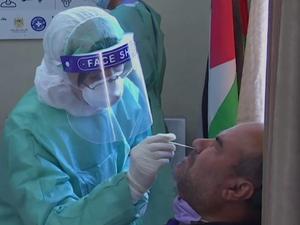 Gaza's health ministry said Wednesday that more than a thousand cases of coronavirus were recorded over the previous day, the highest daily infection toll in several months.

The spike in the coastal Palestinian enclave, controlled by Hamas Islamists since 2007, stands in contrast to the slowdown in infections in Israel, which maintains a tight blockade on Gaza.

"The epidemiological situation in the Gaza Strip is dangerous," said Magdy Dahir, deputy director of primary care at the Gaza health ministry. "There is a clear increase in hospitalisations."

In Gaza, 65,500 people have been infected with Covid-19 and 610 deaths recorded since the start of the pandemic.

The Hamas-run government, which imposed a 9:00 pm (1800 GMT) curfew on Saturday to curb transmission, has ordered new restrictions on gatherings beginning Wednesday, the Gaza Hotels and Restaurants Association said.

But in the occupied West Bank, Palestinian Authority health minister Mai Al-Kaila told the official Voice of Palestine radio that the rate of increase was slowing, after a wave of infections packed local hospitals.

The Palestinian health ministry announced that, as of Monday morning, more than 69,000 Palestinians in the West Bank and Gaza had received one vaccine jab.

By contrast, more than half of Israel's roughly 9.3 million residents have been inoculated with two Pfizer-BioNTech shots.

The latest daily increase in Israel was 442 cases, down from thousands of daily cases earlier in March.

Rights groups have called on Israel to supply vaccines to Palestinians.

Israel has given limited doses to some Palestinians, but it says the Palestinian Authority is responsible for the general vaccination campaign.

On Tuesday, the Israeli health ministry said it detected a new Israeli variant of the coronavirus. It said the strain was rare, and not more contagious or deadly than other variants.