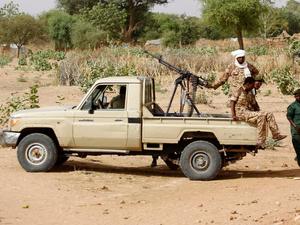 "The committee recorded 18 fatalities and 54 wounded, who are receiving medical care at Al-Jeneina Teaching Hospital," the West Darfur Doctors' Committee said in a statement, citing clashes on Saturday and Sunday.

"On Monday, we woke up to the sound of gunfire... clashes are still ongoing and have spread to the western suburbs of the town (Al-Jeneina)," Abdelrahman Ahmed, an eyewitness, told AFP.

The committee, part of a nationwide independent body formed in 2016 representing the medical community, said an ambulance carrying wounded victims was attacked in the melee.

The vast Darfur region was the scene of a bitter conflict that erupted in 2003, leaving around 300,000 people killed and 2.5 million displaced, according to the United Nations.

The conflict has subsided over the years, but ethnic and tribal clashes still periodically flare in the region over land and access to water.

More than 200 people were killed in tribal clashes in January, in some of the worst bloodshed the region had witnessed in years.

Sudan is in the midst of a rocky transitional period following the toppling of long-time president Omar al-Bashir in April 2019 off the back of mass protests against his rule.

The transitional government has pushed to build peace with rebel groups in Sudan's main conflict zones, including Darfur.

On December 31 last year, the UN and African Union ended a 13-year peacekeeping mission in Darfur, even as residents feared further violence erupting in the region.