HRW Says Freedom of Expression under Threat in Jordan 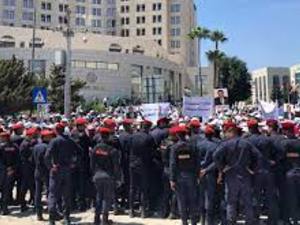 Authoritarianism is increasing and the freedom of expression being attacked in Jordan, the Human Rights Watch group warned Monday, following a wave of arrests in the kingdom over an alleged plot.

The government in Amman has accused former crown prince Hamzah, a vocal opponent of the monarchy, of involvement in a conspiracy to destabilize the Hasemite Kingdom's security, placing him under house arrest and detaining at least 16 others.

The crisis within Jordan's ruling family comes against the backdrop of a "perceived increase in authoritarianism and a diminishing space for freedom of expression and political dialogue in the Middle East nation, Human Rights Watch (HRW) Middle East and North Africa Deputy Director Adam Coodle told AFP.

Hamzah, 41, said in a recording sent to the BBC Saturday that he had been ordered to stay inside his Amman place but would defy orders limiting his freedom.

After being stripped of his title by his half-brother King Abdullah II in 20014 Hamzah has emerged as a critic of corruption, nepotism and authoritarian rule in Jordan.

Coogle said the prince was reflecting ongoing "public angst and frustration over the economic situation as well as the perceived increase of authoritarianism in the country."

"There's been just a creeping securitization of all the government agencies," he added.

The NGO official expressed concern that growing public support for the prince could be met with further arrests and further repression.

"If that leads to public criticism, of the state, or of the way the government has handled this you could definitely see additional arrests," Coogle said.

"You could see a real tightening of the remaining vestiges of free expression online," he added.

The rift in Jordan's royal family has exposed the kingdom to instability, when it is usually considered a pillar of stability and reliable partner to the U.S. and Gulf states in a region plagued by instability.

Coogle said Jordan had become increasingly influenced by leaders within its security apparatus particularly following the expansion of the Islamic State (IS) in neighboring Iraq and Syria.