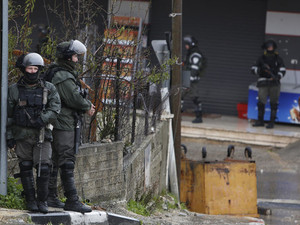 A Palestinian motorist was killed and his wife wounded by Israeli fire in the occupied West Bank on Tuesday, the Palestinian health ministry said.

The Palestinian died "after sustaining head wounds from live fire in Bir Nabala ... and his wife suffered bullet wounds to her back," the ministry said.

The Palestinians' official Wafa news agency said the shooting took place at dawn as the couple were travelling in their car.

There was no immediate word on why the couple had been fired on.

Contacted by AFP, the Israeli military had no immediate comment.

The news agency said there had been clashes between Palestinian residents and the Israeli army in the Bir Nabala area on Monday evening.

Israel has occupied the West Bank since the Six-Day War of 1967.