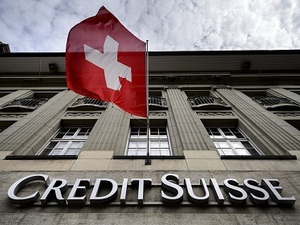 Credit Suisse said Tuesday that it had taken a $4.7 billion hit from its links to troubled hedge fund Archegos Capital Management, cut dividends and announced the departure of two senior executives.

The Swiss bank and Japan's Nomura warned last month that they could face significant losses due to their exposure to a US hedge fund forced to liquidate its holdings.

"The significant loss in our Prime Services business relating to the failure of a US-based hedge fund is unacceptable," CEO Thomas Gottstein said in statement on Tuesday.

Bloomberg News has reported that the fund was little-known Archegos Capital Management, which sold more than $20 billion in stocks from US media and Chinese companies as it sought to cover its obligations to its lenders.

Credit Suisse said its pre-tax loss of 900 million Swiss francs in the first three months of the year includes 4.4 billion Swiss francs ($4.7 billion, 3.9 billion euros) related to "the failure by a US-based hedge fund to meet its margin commitments as we announced on March 29".

Trading on margin is the practice of using borrowed funds to invest in financial assets such as stocks. It can be very profitable for borrowers as they are often only required to put down a small percentage in cash while the stocks serve as collateral for the lender.

But large shifts in share prices can force borrowers to put up more money to meet their margin commitments, or sell the shares and potentially lose more than their investment and default on their loan.

Credit Suisse also announced the departure of the head of its investment bank and chief risk and compliance officer, pulled bonuses for senior executives and chopped its proposed dividend payment to shareholders.

The bank's board of directors opened an investigation into the matter.

It also pulled a traditional resolution for shareholders to discharge the board and executive committee members of responsibility for actions taken during the previous year.

"The Board of Directors believes it is in the best interest of the shareholders to consider this proposal when the internal investigations into the recent developments have been completed and the outcome communicated," it said in a statement.

AvaTrade analyst Naeem Aslam said "the Archegos fallout ... has become a significant nightmare for Credit Suisse, and the bank has to take the right steps for its survival as losses are just too big to digest."

Shares in Credit Suisse shed 1.1 percent in morning trading, while the main Swiss Market Index was up 0.3 percent.

Credit Suisse also announced a separate probe into its supply chain finance funds, a reference to its exposure to the collapse of Greensill, a British firm which specialised in providing short-term financing to companies.

Greensill's complex and opaque business model collapsed last month after an insurer withdrew cover for $4.6 billion worth of loans the firm had issued to customers.

Greensill crashed into insolvency and Credit Suisse has said it is working with the firm's administrators to recover its funds.