'A Space to Listen': Lebanese Tackle Crisis on Clubhouse 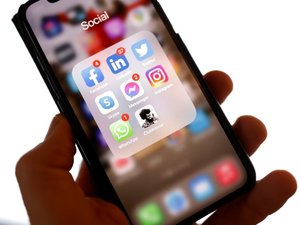 In a break from social media mud-slinging and Lebanon's perennially polarised debates, audio app Clubhouse is hosting a new kind of conversation in the crisis-hit country.

Users say it is achieving a little miracle: free-wheeling political discussions across party lines which don't descend into blows.

Lebanese both at home and abroad have welcomed the break from the acrimony dominating TV and social media platforms.

The live audio app, launched nearly a year ago, is accessible only on Apple mobile devices -- but the coronavirus pandemic has boosted its popularity in the Middle East.

Syrian users have used it to discuss the 10-year-old conflict and life in exile, while Saudis tackle political reform, racism and transgender rights, despite growing fears of state surveillance.

In cash-strapped Lebanon, Clubhouse is a something of a premium service, with an iPhone costing more than ten times the minimum monthly wage.

But experts, journalists and expats active in its virtual "rooms" say they are carving out a space for constructive conversation between people who either never engage with each other or are usually at odds.

"Clubhouse has become a safe space for people to hear each other and more importantly learn from each other and about each other," said Joe Khawly, a Lebanese journalist living in Washington DC.

"It's creating a space where people from different religions and political affiliations are able to virtually meet and talk directly."

A wide range of participants with radically different leanings chat in real time on a gamut of topics, including Lebanon's long list of woes.

The small Mediterranean country has been hit by a succession of crises that have exacerbated political divides among backers of traditional factions and created a growing movement demanding the removal of the entire ruling class.

Some "are trying to seek a way out or to seek reforms from their own side of the narrative," the TV producer told AFP.

Fakih gave the example of a Clubhouse talk on the reforms needed to stem Lebanon's financial crunch.

Participants discussed the need for a new cabinet, nearly eight months since premier Hassan Diab handed in his resignation.

To Fakih's surprise, party loyalists in the conversation veered away from the narratives deployed by their leaders.

"Everyone seemed to agree that the new cabinet needs technocrats, otherwise we are falling into the same trap" as in previous administrations, she said.

Lebanon is reeling from the triple blow of the coronavirus pandemic, an economic collapse and last year's cataclysmic explosion at Beirut port -- meaning there is no shortage of hot topics for debate.

Chat rooms on Clubhouse include "No one is coming to save us" and "What's on the table for change in Lebanon?"

Another tackles the wrangling between premier-designate Saad Hariri and president Michel Aoun over forming a government: "Between Hariri and Aoun: with or against?"

And with strict coronavirus restrictions in place since January robbing the Lebanese of one of their favourite pastimes, many say Clubhouse is helping satisfy their hunger for real talk.

Ali Fawaz, who runs online writing service The Write Words, said "the app surfaced - out of nowhere - at an ideal time. Everyone in Lebanon was yearning for connection and conversation."

The 28-year-old said Clubhouse allowed him raw access to politicians and pundits, including a former minister, who are usually inaccessible to the public.

"Clubhouse truly hit home for me because of the unadulterated, unfiltered conversation you get to have with public personalities," Fawaz said.

"It's by far the closest encounter I've had with a lot of these people, who have chequered pasts and who have never been questioned for it."

Good initiative, as long as the intention is positive, listening to other opinions and views is always constructive, good luck

Every app on the photo is a data collecting tool for businesses and/or governments... usually the 3 letter agencies.