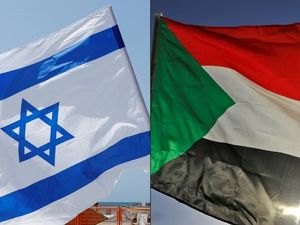 Sudan's cabinet approved a bill Tuesday abolishing a 1958 law on boycotting Israel, after Khartoum and Israel struck a deal to normalize ties.

"The council of ministers approved a bill repealing the 1958 boycott of Israel law," it said in a statement.

It also emphasized "Sudan's firm position on the establishment of a Palestinian state within the framework of a two-state solution."

The 1958 law was in line with the policies of Arab nations at the time towards Israel.

Penalties for those who violated its stipulations, such as trading with Israelis, included up to 10 years in jail and a hefty fine.

But the political landscape has changed as Sudan, along with Gulf countries and Morocco, have built bridges with the Jewish state in deals mediated by the administration of former US president Donald Trump.

Sudan agreed to normalize ties with Israel in October last year, in a quid pro quo for Washington removing the country from its "state sponsors of terrorism" blacklist months later.

Khartoum maintained a rigid anti-Israel stance during the three-decade Islamist rule of former president Omar al-Bashir, who was ousted amid mass protests in April 2019.

A post-Bashir transitional government has been pushing for re-integration with the international community and to rebuild the country's economy after decades of US sanctions and internal conflict.

The bill will be presented for final approval from the country's ruling Sovereign Council, made up of military and civilian figures, before it is passed into law.

The way things are going Lebanon will be amongst the last Arab nations to hold onto the mis-belief that continuing the boycott of Israel is to their advantage.
It's about time that Lebanon learned from the forward looking Arab/Moslem states that there are great advantages to establishing diplomatic, economic, financial and tourism relations with Israel.

wait for the idiots to call you a traitor now.

Just like a true Zionist stooge with name calling, I'm surprised you did not invoke the holocaust

Pay reparations for 30 years of occupation, pay for forcefully sending us 500,000 Palestinian refugees (with a lot of them armed), pay us for the water and soil stolen from Lebanon over 30 years of occupation, pay us for the damages caused by Israeli bombs and guns and tanks and drones and missiles... Take back the Palestinians you sent us and then let's sit down and discuss removing the boycott so we can become civilized like the forward-looking Arab/Moslem states who believe that there are great advantages to establishing diplomatic, economic, financial, and tourism relations with Israel. I can't wait to visit Israel and take selfies in front of army check points (sorry tourism chalets) and Jewish settlers destroying Arab homes and olive groves (oops sorry I meant civilized Jews making business with me because they love that I can become financially and economically advantageous)