Talks to Save Iran Nuclear Deal Get Off to Good Start 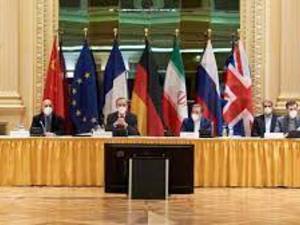 Iran, Russia and the United States have reacted positively to the opening exchanges in a first day of talks in Vienna aimed at rescuing an international agreement on Tehran's nuclear program.

U.S. President Joe Biden has said he is ready to reverse the decision of his predecessor Donald Trump to withdraw from the landmark 2015 agreement, negotiated to ensure that Iran never developed a military nuclear program.

And after Moscow gave a positive assessment of the opening of the talks earlier Tuesday Washington's reaction a little later was also upbeat. Iran too, described the opening talks as constructive.

"I can say that overall, the meeting was constructive," the head of the Iranian delegation, Abbas Araghchi, said in a video on Iranian broadcaster Irinn.

The United States was not present at those discussions because Iran has refused to meet the U.S. delegation so long as its sanctions against Tehran remain in place. The European Union is acting as an intermediary.

It would take time to restore the agreement, he said.

"The most important thing after today's meeting of the Joint Commission is that practical work towards achieving this goal has started," he tweeted.

"We do see this as a constructive and certainly welcome step," U.S. State Department spokesman Ned Price said of the talks a little later.

Since Trump pulled the US out of the deal with Iran in 2018, re-imposing sanctions on Tehran, the remaining parties have been struggling to save the agreement, as Iran has gradually stepped up its nuclear activities.

Tehran is demanding an end to the crippling sanctions Trump imposed -- before which Iran will not meet the US delegates.

Talks between the delegates from the remaining members of the 2015 agreement will continue Wednesday at the luxury hotel in Vienna, a diplomat familiar with the discussions said.

The U.S. delegation is due to meet in a different high-end hotel, also in downtown Vienna, with EU negotiators acting as go-betweens.

At the same time, two expert-level groups -- on sanctions lifting and nuclear issues -- are working "to identify concrete measures to be taken by Washington and Tehran" to restore the deal, Ulyanov said.

"We need to make the best of this diplomatic space to bring the JCPOA back on track," said a tweet from EU diplomat Enrique Mora, the chair of Tuesday's meeting, referring to the pact by its acronym.

"Our clear goal is to return to full and effective implementation of the agreement by all sides," he added.

Ahead of the talks, US special envoy Rob Malley suggested that the United States could be open to lifting sanctions and returning to the deal, comments welcomed by Iran government spokesman Ali Rabiei.

"We find this position realistic and promising. It could be the start of correcting the bad process that had taken diplomacy to a dead end," he told reporters in Tehran.

Iran confirmed in January it was enriching uranium to 20 percent purity, well beyond the threshold set by the deal.

Rabiei reiterated Iran was ready to reverse the steps it had taken as soon as all sanctions imposed during the Trump administration are lifted.

EU spokeswoman Nabila Massrali warned of a "complex process" ahead, stressing that it was too soon to anticipate the outcome.

It would take "joint efforts", she said, to see "what sanctions can be lifted and how to settle the nuclear issue".

Kelsey Davenport, director for Non-proliferation Policy at the Arms Control Association think-tank, argued on the eve of the talks for a "bold first step by both sides" to inject "much-needed momentum" into the process.

Washington, for example, could unfreeze Iranian funds held in foreign banks and facilitate humanitarian trade, and Tehran could stop enriching uranium beyond the levels agreed in the 2015 accord, said Davenport.