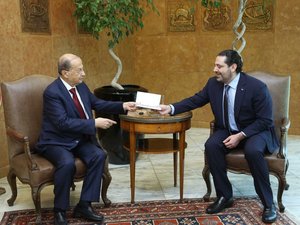 President Michel Aoun on Wednesday stressed that there should be no “elimination or discrimination” in the cabinet formation process.

In a meeting with Egyptian Foreign Minister Sameh Shoukry in Baabda, Aoun called for respecting “the norms of the constitution and the National Pact on which the Lebanese system is based” in order to “overcome this crisis.”

He also called for cooperation among all Lebanese parties “without elimination or discrimination.”

Moreover, Aoun thanked Egypt for “helping Lebanon in the face of the various crises, especially the governmental crisis,” hoping Cairo’s efforts regarding the new cabinet will lead to “positive results.”

The president also explained to Shoukry “the obstacles that the government formation process has faced,” thanking Egyptian President Abdel Fattah al-Sisi for “his initiative that is based on Egypt standing at the same distance from all Lebanese, as it has always been throughout history.”

I have reached the stage were I have become ashamed to consider myself a Lebanese Christian because of this senile lunatic and his sick followers.

may be you should just call yourself a Lebanese