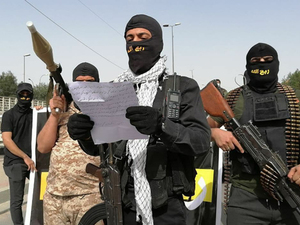 Iraqi Prime Minister Mustafa al-Kadhemi faces daily pressure from pro-Iranian groups at home, but that has not stopped him from reaching out to Tehran's enemies.

It is a fine balancing act for Kadhemi, a former intelligence chief who is a political independent with no party or popular base, and who has now been in office for one year.

Iraq -- still battered and impoverished after the 2003 U.S.-led invasion and the turmoil that followed -- is now a battleground for influence between arch-foes Washington and Tehran.

Not a day goes by without a rocket or bomb attack on U.S. troops, contractors or diplomats, or harsh insults levelled against Kadhemi from pro-Iranian groups who accuse him of being an American lackey.

The paramilitaries, and the politicians who back them, insist that Baghdad follow through on the Iraqi parliament's decision to expel the 2,500 U.S. troops who are still in the country, to help fight the Islamic State group.

The legislature demanded their withdrawal in January 2020 when anger was boiling over the U.S. drone killing ordered by Donald Trump of revered Iranian general Qasem Soleimani and his Iraqi lieutenant in Baghdad.

With this, he is sending a clear message to Iran, said analyst Ihsan al-Shammari of the Iraqi Centre for Political Thought: "Iraq does not depend on Tehran for its diplomatic decisions, as Iran and its allies demand."

Kadhemi -- who is only supposed to lead Iraq until early elections, possibly in October -- has to balance the interests of the pro-Iranian Shiite camp with those of the Kurdish and Sunni Arab minorities.

Those groups, and Washington's Gulf allies, see the US presence in Iraq as protection from Iran, which backs Shiite proxy forces forces in several regional countries.

Western and Iraqi officials say Kadhemi expects the Americans to set a timetable for their withdrawal, but likely over several years.

This timetable would maintain international military support against IS remnants while allowing the premier to tell pro-Iranians that he is working to implement the parliamentary vote.

But an Iraqi official told AFP that Soleimani's successor as Iran's pointman in Iraq, Brigadier General Ismail Qaani, was in Baghdad in recent days to demand that Iraqi politicians impose a withdrawal date on Washington.

Before the talks with the United States even began on Wednesday, a spokesman for the Hezbollah Brigades, one of Iraq's most radical pro-Iran factions, rejected the dialogue.

"It has no value because the Iraqi people have already decided that they want an end to the American occupation," Jaafar al-Husseini said, promising to "continue to put pressure on America."

Kadhemi has received support from a powerful Shiite voice: Moqtada Sadr, the former militia leader who 18 years ago urged his followers to take up arms against the U.S.-led occupation.

"The opening to Arab countries is a step in the right direction," Sadr wrote on Twitter, having himself visited Saudi Arabia and the United Arab Emirates in 2017.

With IS jihadists in Iraq now reduced to clandestine cells holed up in mountains and deserts, the real threat today, according to the U.S. and Iraqi militaries, is posed by pro-Iran factions that fire rockets or plant bombs and sometimes even claim attacks outside Iraq.

In January, explosive-laden drones crashed into the main royal palace in Riyadh, with American media citing US officials as saying they were launched from neighboring Iraq.

A relatively unknown militant group in Iraq considered by security experts to be a front for more entrenched Iran-backed groups claimed responsibility.

Kadhemi said this claim was "not true" and insisted that "there haven't been any attacks" from Iraq and that "we will not allow any attack on the kingdom."

The Iraqi premier had planned to make his first official foreign trip to Saudi Arabia last July, but the visit was cancelled when King Salman was hospitalized.

After his recent trip to Riyadh, Kadhemi returned home with a Saudi promise to multiply its investments in Iraq fivefold, to more than $2.6 billion, this year.

The Iraqi premier also went to another oil-rich Gulf destination, Abu Dhabi, where he talked about the economy and investments.

"We don't want to be on any single side," said an Iraqi official, requesting anonymity. "We will work hard to bring investments to Iraq from neighboring countries and beyond."