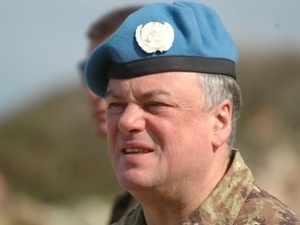 UNIFIL Head of Mission and Force Commander Major General Stefano Del Col on Wednesday chaired a special Tripartite meeting with senior officers from the Lebanese Armed Forces (LAF) and the Israeli army at a U.N. position in Ras al-Naqoura.

The meeting was held in a modified format due to ongoing COVID-19 restrictions.

Discussions focused on the situation along the Blue Line, air and ground violations, as well as other issues within the scope of UNIFIL's mandate under U.N. Security Council Resolution 1701, a UNIFIL statement said.

Del Col encouraged the parties to continue to make use of UNIFIL's liaison and coordination mechanisms to avoid potential tensions and escalations.

"Our liaison and coordination mechanism has again proven its value at reducing tension along the Blue Line and resolving contentious issues through constructive engagement," said the UNIFIL Head of Mission, referring to recent examples of success.

He called for the continued engagement of the parties with UNIFIL as the Mission proceeds with implementing the recommendations of UNIFIL's assessment, presented by the U.N. Secretary-General to the Security Council on 1 June 2020. The assessment was supported by the Member States, including most recently on 18 March during the Council’s consultations on the implementation of resolution 1701 (2006).

The UNIFIL Head of Mission called on the parties to work with UNIFIL and "build on the progress that has been achieved to date to address the outstanding contentious areas along the Blue Line to enhance stability and reduce the potential for escalation," the statement added.

Since the end of the 2006 war between Israel and Hizbullah, regular Tripartite meetings have been held under UNIFIL's auspices as an "essential conflict management and confidence-building mechanism."