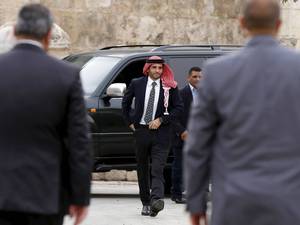 Jordan's Prince Hamzah, accused of plotting against the kingdom's "security and stability", disappeared from the local press Wednesday following a prosecutor's order banning coverage of the kingdom's worst crisis in decades.

Gone are reports of a "wicked plot" aimed at overthrowing King Abdullah II, and there is no news on the fate of those arrested in the affair.

Amman prosecutor Hassan al-Abdallat on Tuesday banned the publication of any information about the alleged plot said to involve Prince Hamzah, the king's half-brother, in order to keep the security services' investigation secret.

Mustafa Al-Riyalat, editor-in-chief of semi-governmental newspaper Addustour, said the silence of the press was justified.

"Thank God, things are back to normal," he told AFP.

"Jordanians all feel reassured because it's as if nothing happened."

He said the press would have to wait for official statements before publishing anything about those arrested.

The government has accused Hamzah -- a former crown prince who was sidelined as heir to the throne in 2004 -- of involvement in a conspiracy to "destabilize the kingdom's security" and also arrested at least 16 people.

But on Wednesday three main subjects made the front pages: the visit of Saudi Foreign Minister Faysal Bin Farhan with a message from King Salman and developments in the coronavirus outbreak ravaging the country, as well as the prosecutor's blackout order.

Hamzah had made extensive use of the media to lash out against his situation, accusing Jordan's rulers of corruption, nepotism and ineptitude in a video message he sent to the BBC on Saturday.

But on Monday, following mediation by an uncle, he pledged loyalty to the king.

Ahmed Awad of the Phenix Center for Economics & Informatics Studies said the crisis was not yet over.

"There was a solution within the royal family but not a solution to the political crisis," he said.

"The real political crisis... will continue until there are more democratic reforms."