Egyptian FM Pushes for 'Fast' Formation of 'Govt. of Specialists' 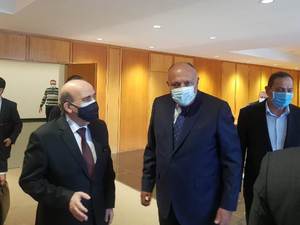 Visiting Egyptian Foreign Minister Sameh Shoukry on Wednesday urged Lebanon’s leaders to seek the quick formation of a so-called government of specialists that can rescue the country from its multiple crises.

“I expressed our concern in Egypt and at the regional and international levels over the continuation of the political crisis,” Shoukry said after meeting Speaker Nabih Berri in Ain el-Tineh.

“I stressed the importance of working vigorously and quickly to form a government of specialists in order to exit this crisis,” he added.

Shoukry also expressed to Berri Egypt’s “great appreciation of his efforts and of the initiative he is launching in order to overcome this crisis,” adding that Cairo is ready to “offer everything in its capacity to help the brothers overcome this crisis.”

Earlier in the day, Shoukry held talks with President Michel Aoun in Baabda.

“I was honored to visit the president to relay a message of solidarity from his brother, His Excellency President Abdel Fattah al-Sisi,” Shoukry said.

“Unfortunately, after eight months (from the port blast and Shoukry’s last visit to Lebanon), there is still political impasse and efforts are still being exerted to form a government of specialists who can meet the needs of the brotherly Lebanese people and achieve stability, which is important not only for Lebanon but also for the region and Egypt,” the Egyptian FM added.

A statement issued by the Egyptian embassy said Shoukry’s visit is “part of the Egyptian efforts aimed at urging the Lebanese political parties to speed up the formation of a salvation government, in light of the Egyptian political leadership’s great keenness on Lebanon’s stability and on its defeat of the crises it is currently going through.”

Egypt is a dictatorship, they can keep their advice.