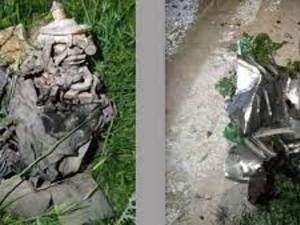 Israel carried out a missile attack near the Syrian capital of Damascus and its southern suburbs early Thursday that wounded four soldiers, Syria's state media said.

State news agency, SANA, quoted an unidentified military official as saying that Syrian air defenses were able to shoot down most of the missiles before they hit their targets. SANA said some of the missiles were fired by Israeli warplanes flying over neighboring Lebanon.

The source did not provide details on the targets.

The strikes near the capital "destroyed a weapons depot likely used by the Lebanese Hizbullah militia," among other Iran-backed groups, said the Syrian Observatory for Human Rights.

The Observatory said it could not determine their nationalities but that they were all non-Syrians.

Al-Manar TV of Lebanon's Hizbullah said one of the Syrian air defense missiles exploded near the Lebanon-Syria border and was heard in parts of southern Lebanon. It later said the missile crashed near the Lebanese border village of Houla.

Israel has launched hundreds of strikes against Iran-linked military targets in Syria over the years but rarely acknowledges or discusses such operations.

Israel views Iranian entrenchment on its northern frontier as a red line, and it has repeatedly struck Iran-linked facilities and weapons convoys destined for Hizbullah.

Will Lebanon file a complaint with the UN regarding Syrian missiles falling inside Lebanese territory?

It should . This is becoming a pattern, Israel attacks Syria , Syria bombards Lebanon “accidentally”.

THey send their minions in, and now a missle. If the government had cajones, they would file against ALL foreign transgressions

When Lebanon harbors terrorists such as yourself and Hezbollah, Israel has every right to use Lebanese airspace.

Why don't you move to Israel if you love them so much? See how well they treated Lahad and his army. They spat him out and left him to rot.

You Christians are nothing but a tool in the region.

You Shia have your roots in Yemen and Iraq, you’re not Canaanites exactly like the white Jews. the time to plan your return home has come.

Geageas boys are weak. We all know it

Lahad and his army were cowards without Israeli technology and jets to support them.

Us Christians are standing i n your way, that's what gets your sorry ass

mystic you only need look at syria iran yemen and Lebanon. your iranian terrorist goons and their brainwashed uneducated sheep have zero to be proud of...nothing but poverty, war, chaos, inflation, unemployment, backwardness, non progressive,corrupt, money wasted on wepons not food education or healthcare- just sheer mayhem. if anypone dares speak they are assassinated or the brainwashed goons put on their black t-shirts and terrorize their fellow countrymen on motorbikes. wow something many countries aspire to. imbecile.