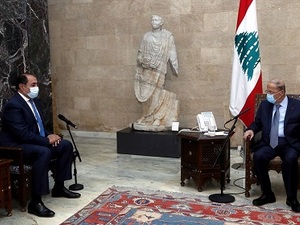 President Michel Aoun on Thursday stressed that Lebanon is committed to the Taef Accord, during a meeting with Arab League Assistant Secretary-General Hossam Zaki in Baabda.

At the beginning of the meeting, Aoun said he welcomes any Arab League initiative aimed at resolving the current Lebanese crisis, telling Zaki that Lebanon appreciates the care that the League is showing towards Lebanon.

The president also explained to Zaki “the reasons that have so far prevented the government’s formation and the obstacles that have been put in its way,” emphasizing that “Lebanon is committed to the implementation of the Taef Accord from which the constitution emerged.”

Aoun, however, stressed that “the constitution must be respected by everyone and its articles must be implemented, especially as to everything related to the formation, work and dissolution.”

“Everything that is being said contrary to that and anything hinting that the Taef Accord is threatened is unrealistic and being circulated by known sides concerned with the formation process,” the president said.

He added that “the head of the state is the only official who takes an oath to preserve the constitution.”

Aoun to Arab League's Zaki: Lebanon is committed to Taef Accord

yes just like Aoun and Lebanon are committed to U.N Resolution 1701. I don't know who this man is fooling......

Add to that Aoun's adherence to the dissociation policy of not interfering in Arab countries internal affairs such as sending criminal armed terrorists to Syria, Iraq, Yemen and Bahrain.

Aoun presumably refers to the fifty-split of parliament between Christians and Muslims, regardless of electoral outcomes. Article 24 of the Constitution, it is the basis of Lebanon's instability. Noam Chomsky says Shia Muslims alone are more than half the national population.

Noam Chomsky might as well be Homer Simpson, they both know just about the same about Lebanon demography, haha idiot.

If Muslims were not the majority, the French-aligned Christians would not want the Taef set-aside.

I never said that Muslims are not the majority, idiot. That would be incorrect and a stupid thing to say, you know, like all stuff you say. The ones that refused to completely implement the Taef are the ones who controlled Lebanon from 1990 to 2005, ie the Syrian occupation and de facto from 2005 ie Hezbollah. From 1990 to 2015 all the true representatives of the Christians were either in exile, in jail or prosecuted and had no say in Lebanese politics. And since 2015 Hezbollah, ie Iran, have used Michel Aoun and his group as their instrument for obstruction, appointing him president in return.

The complete implementation the Taef means the Hezbollah. the Lebanese arm of the Iranian revolutionary guards, will have to hand over it's weapons to the state just like all other militias did. Which is why Hezbollah is against it. If the complete Taef was implemented in 1993 would have meant also implementing Article 95 addressing the abolition of political confessionalism. The Syrians needed to use the sectarian system to control, divide and conquer.

Yes, don’t worry Taef not threatened. But the whole country is and going down the drains, Lebanon a sinking ship and some are worries about Taef?

In the transitory period
:a. The sects are fairly represented in the formation of the Cabinet.
:b. The rule of sectarian representation is abrogated. Jurisdiction and efficiency are adopted in public employment, the Judiciary, the military and security establishments, the public and mixed organizations, according to the exigencies of national harmony, with the exception of the jobs of the first rank and the equivalence of the first rank therein. These jobs are equally divided between Christians and Moslems without specifying any job to a specific sect, taking into consideration the two principles of jurisdiction and efficiency.

Article 95 The Chamber of Deputies, lected on the basis of half Moslems and half Christians, must take the appropriate measures to eliminate political sectarianism, according to an interim plan, and the formation of a National Council under the presidency of the President of the Republic consisting, in addition to the President of the Chamber of Deputies and the Prime Minister, political, intellectual and social notables.
The mission of the Council is to study and suggest the means capable of eliminating the sectarianism, and introducing them to the Chamber of Deputies and the Council of Ministers, and to follow up on the interim plan.

I think we know what to expect if Lebanon abandons sectarianism: France will find some help in punishing Lebanon. The US will use this excuse to bomb somebody somewhere. Israel will start to think about setting its slaves free.
What Lebanon needs is law. Look at the puffy language in Article 95, vague conditions that will never be fulfilled, vague standards for what happens in the meantime.
"Crazy" means, literally, "broken".
Oompa-Loompas should sit down with his neighbors in Hezbullah and urge them to support majority rule and minority rights with the assurance that all Lebanon will stand together against the colonialist and imperialist backlash. Israel is a constant reminder: racism does not work.

Please Chris stop using "I think". You don't. You can't. And you keep giving France more credit that it deserves. You confuse Lebanon with an ex-French colony in Africa in the 1970s. This happens when you imagine yourself an expert on something you know nothing about.

I expect Israel's government, if not Noam Chomsky, knows the decimal point the ethnic demographics in Lebanon.
The Taef Accord is always described, at least in Wikipedia, as "unwritten". If you're going to have an unwritten agreement, it had better be something like "treat each person according to conduct, not appearance."

The Taef Accord is unwritten?!! hahahahahah!!! Who told you this Noam Chomsky? Good old same old Chris, always the fool never wanting to learn anything because, and I think we all know this because he keeps telling us, he's so clever he understand without having to learn, he just gets things. Never change Chris LOL. The Taef Accord is an actual written document that basically updated and reformed the Lebanese constitution. Seriously what's the point of arguing or even trying to educate an idiot. You don't even understand what you read in Wikipedia. You are confusing the national pact, unwritten, with the Taef. It's like confusing Chris Rushlau with a scholar or an intellectual, unless you are Chris Rushlau, a genius in his own unwritten mind.

Thanks for the correction. I was indeed thinking of the "national pact". The problem with the Taef Accord is that it has no force of law. Can you imagine the US Congress passing a law which is signed by the President that calls on everybody to be nice?
I assume you have a new alias since I've not seen this tag before yet you claim to be a student of mine. Why do you hide?
You have been crippled by a European education, evidently: "basically updated and reformed the Lebanese Constitution", without following the Constitution's own stated means of amending it, presumably. I think you will agree that Article 95 is a lot of empty talk.
The problem as I see it is that Hezbullah does not want majority rule. It fears French-US-Israeli retaliation.