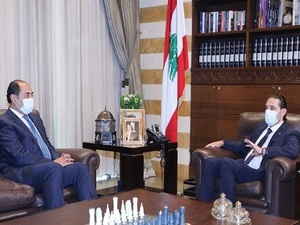 Speaking after talks in Baabda, Zaki said he expressed to Aoun the readiness of Arab League chief Ahmed Aboul Gheit to mediate “between the main parties of the crisis if there is a need for the Arab League to intervene.”

Zaki said he also inquired about “the talk that recently increased about the Taef Accord, its fate and whether it is threatened in any form.”

Following talks with Hariri, Zaki said he informed the PM-designate of the Arab League’s “desire to help resolve this crisis and pull Lebanon out of this dilemma it is facing due to the failure to form a government.”

He added that he believes that Hariri “has an idea that the proposal that came from Speaker Nabih Berri is a largely acceptable suggestion.”

Asked about the obstacles delaying the government’s formation and the indications he sensed in Baabda, Zaki said: “We are not carrying an initiative and we are not pressing the parties, but we are annoyed and concerned over the political and economic situation in Lebanon.”

He added: “The currently raised ideas, especially those proposed by Speaker Nabih Berri, are ideas that can be capitalized on and can represent a good exit from the current crisis.”

“Communication between Speaker Berri and the Arab League will continue and the ideas suggested by Speaker Nabih Berri are good ideas that deserve all support from us,” Zaki went on to say.