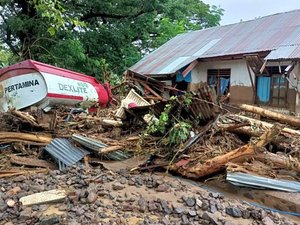 Indonesian navy ships packed with aid arrived Thursday in a cyclone-ravaged section of the archipelago, as the death toll from the disaster rose to above 200 people, including dozens killed in neighboring East Timor.

Local authorities declared a state of emergency for East Nusa Tenggara -- among Indonesia's poorest provinces and the epicenter of the disaster -- until early May.

Torrential rains from Tropical Cyclone Seroja, one of the most destructive storms to hit the region in years, turned small communities into wastelands of mud and uprooted trees, sending thousands fleeing to shelters amid widespread power blackouts.

Some weighed abandoning their disaster-struck hometowns for good.

"I don't want to stay here any longer even though I was born in this village," said Emirensiana Wua, 51, a resident of hard-hit Lembata island.

"It's scary. There's nothing left. It was all destroyed."

The cyclone is now headed for Australia where authorities urged holidaymakers to evacuate a stretch of the country's western coastline before it hits landfall late Sunday or early Monday.

In Indonesia, the navy vessels docked at Lembata and Adonara islands with a hospital ship that was also en route to the ravaged area, where thousands have been left homeless and dozens are still missing.

The storm on Sunday swept buildings in some villages down a mountainside and to the shore of the ocean on Lembata.

The navy vessels are packed with food, including rice and noodles, as well as blankets and other materials for some of the region's more than 20,000 evacuees.

"Another ship will arrive later today carrying military personnel who will be deployed to help people in the aftermath of the disaster," Kompiang Aribawa, a regional naval base chief, said earlier Thursday.

At least 165 people have been listed as dead in Indonesia.

Another 37 were killed in East Timor -- a tiny half-island nation of 1.3 million sandwiched between Indonesia and Australia that is officially known as Timor-Leste.

More than 55 people are still listed as missing, with disaster agency officials deploying sniffer dogs to search mountains of debris for bodies -- and any survivors.

Rescuers have spent the past few days using diggers and shovels to extract mud-covered corpses from the debris.

Hospitals, bridges and thousands of homes were damaged or destroyed by the storm.

Authorities in both countries are also battling to avoid Covid-19 outbreaks in crammed evacuation shelters.

Fatal landslides and flash floods are common across the Indonesian archipelago during the rainy season, with deforestation often the cause, environmentalists say.

"In the past decade these storms have been happening more frequently," he said.

"But land use planning there rarely factors in what happens if heavy rains come... They weren't ready."

The disaster agency has estimated that 125 million Indonesians -- nearly half of the country's population -- live in areas at risk of landslides.