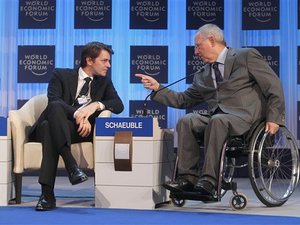 Europe's financial chiefs tried Friday to soothe the fears of global chief executives and other political leaders, insisting they have a handle on the eurozone's troubles.

European Monetary Affairs Commissioner Olli Rehn said Friday he hopes a Greek debt restructuring deal would be reached "if not today maybe by the weekend."

German Finance Minister Wolfgang Schaeuble said he was "quite optimistic" about a deal, despite recent strains in the complex talks, and that he did not expect Greece to default.

Both spoke Friday at the World Economic Forum in the Swiss ski resort of Davos, where many business and political VIPs fear that Europe's debt crisis will drag the global economy into a new recession.

Schaeuble stressed that recent developments in markets have been "positive" for Italy and Spain.

All of them threw cold water on talk of jointly issued eurobonds, which many prominent figures have recommended to reduce the borrowing costs of heavily indebted countries by pooling them with bonds of stronger economies like Germany's.

The U.N.'s refugee chief warned the leaders meeting in Davos that the global economic crisis is fueling conflicts around the world.

Antonio Guterres told The Associated Press on Friday that rising food prices and growing unemployment are hitting those already at the bottom hardest.

Guterres said existing humanitarian hotspots in Afghanistan, Iraq and Somalia aren't going away while new emergencies are emerging in places like South Sudan. He urged donors to increase funding to prevent aid for 500,000 people in the newly independent country from drying up.