57 Civilians, 12 Troops Dead as Syrians Rally for 'Right to Self-defense' 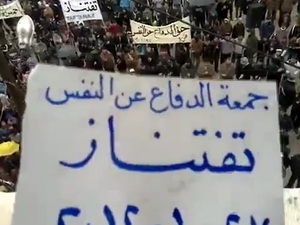 Syrian forces on Friday raided the rebellious city of Homs and shot dead at least 60 people across the country, activists said, as protesters took to the streets under the slogan "The Right to Self-defense," which refers to their support for the rebel Free Syrian Army.

Six were killed in a car bomb targeting a security checkpoint in the northwestern city of Idlib. The other six were killed and five wounded in the southern province of Daraa when army deserters ambushed two buses transporting security personnel, the Observatory's Rami Abdul Rahman told Agence France Presse.

The pre-dawn assault, and reports of similar offensives against Hama and other cities, came hours after the U.N. said it could no longer keep track of the death toll in Syria, which it put at more than 5,400 over a month ago.

The Homs raid began in the Karm al-Zeitoun neighborhood, the Syrian Observatory for Human Rights said.

The LCC said that by Friday regime forces had pounded the Bab Seba neighborhood with heavy artillery and rocket fire. Fighting was also heard in Baba Amro district.

The Observatory said another flashpoint central city, Hama, also came under assault in the early hours of Friday, with intense firing from heavy machineguns and loud explosions heard.

In the outskirts of Damascus, an 11-year-old boy was killed at a checkpoint in Hamuriyeh, the Observatory said, and in Aleppo, the country's second-biggest city, six civilians were killed when security forces "fired indiscriminately" on demonstrators in the al-Marjeh neighborhood, the first fatalities in the city since the beginning of the uprising.

The Syrian National Council, the biggest opposition umbrella group, condemned the offensives against opposition strongholds and said it was in contact with members of the U.N. Security Council to press for strong condemnation of Syria.

Meanwhile, the rebel Free Syrian Army said it had captured five Iranian soldiers in Homs who it said were under orders of the Syrian intelligence service.

The Turkey-based group, formed from deserters from the Syrian army, called on Iran to admit its support for the embattled Syrian regime and demanded the officers immediately leave the Syrian territory.

Violence across Syria claimed 62 lives on Thursday, the majority of them civilians in the central city of Homs, activists said Friday.

"The number of civilians killed on Thursday, whose name and circumstances of death have been confirmed, reached 43, 33 of them in the city of Homs," said the Syrian Observatory for Human Rights.

Seven deserters and 12 soldiers were also killed on the same day.

The more filthy Sunni crazies get terminated, the less there will be Al Qaida members next door.

Gaston, what a nazi piece of shit you are!. The Sunis are the vast majority in the Arab world, why don't you nuke them while you are at it?!. it is stupid arrogant racist people like you that create civil wars, if you hate the sunis so much you simply cant live in Arabia. The suni giant has woken up because filthy garbagae like you need to be cleaned.

The more Sunnis there are, the more crazies come out of them. This is the law of proportionality, not to mention their filthy indoctrination at the hands of the crazies everywhere who are funded by the filthy kingdom of Saudi Arabia.