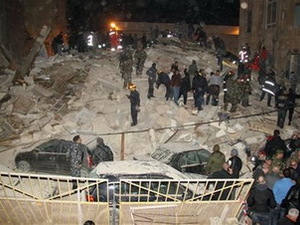 A two-storey building collapsed on Friday in the Akkar town of Bebnin, reportedly leaving one person wounded.

“The collapsed building in Bebnin belongs to citizen Zakariya Soufan and it was inhabited by six people; however, the divine providence rescued everyone,” Al-Manar television reported.

“But the collapse sparked panic, especially that there are a lot of cracked buildings in the region,” Al-Manar added.

For its part, Future News television reported that “teenager Bashar Soufan was wounded when the ceiling of his family’s house collapsed in Bebnin.”

The recent collapse of a building in the Ashrafiyeh neighborhood of Fassouh in which 27 people died has put the spotlight on the dismal state of run-down properties across the country that many say are "ticking time bombs".

The tragedy on January 15 saw a six-storey apartment block crumble to the ground within minutes, burying residents, many of them foreign laborers, who had no time to scramble to safety.

The collapse sparked widespread anger and accusations that successive governments had failed to address a problem staring them in the face.

Although there are no firm statistics, the streets of the capital are dotted with derelict buildings lined with cracks, missing balconies and rusting grids which stand in stark contrast to shiny new high rises.

"The problem of unsafe housing is not limited to Beirut -- it's spread throughout Lebanon," said Rached Sarkis, a civil engineer and founder of the Lebanese Association of Seismic Hazard Mitigation.

"Prior to 2005, buildings in Lebanon did not have to meet international standards as the government had not passed a decree to that effect," he told Agence France Presse.

"Developers took advantage of the situation to maximize profit at the expense of public safety."

Compounding the problem is the fact that many buildings in Lebanon were built illegally, especially during the 1975-1990 civil war. Some owners added new floors to existing apartment blocks with no permits.

"Many buildings were also built prior to the 1971 construction law which requires structural study before building," said MP Mohammed Qabbani, head of the parliamentary committee for public works.

"It's a random, haphazard operation," he added. "The building that collapsed seemed to have no metal grid. It lacked the basic foundations."

And there are many more like it across the city, experts warn.

Very sad. And all this with no earthquakes.

i guess lady gaga went there and building collapsed out of shame.

Are you sure the Syrian army didn't do this by taking 3 steps into Lebanon and shooting randomly at civilians?