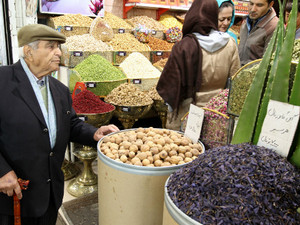 A raft of Western economic sanctions on Iran over its controversial nuclear program are increasingly stifling the lives of ordinary Iranians, hit by rising inflation and growing isolation.

EU and U.S. banking sanctions put in place 18 months ago, and reinforced on Monday, have fuelled Iran's runaway inflation and triggered a collapse in the value of the rial, with implications for the country's residents and diaspora.

"The cost of foreign products, whose value is linked to the dollar, has risen by 20 and 50 percent in recent months," says Ali, who runs a grocery in north Tehran.

"On the other hand, the government closely controls the price of products made in Iran," which represent 90 percent of consumed products. "Dairy products for example have not risen by more than five to 10 percent."

But with inflation officially now pegged at around 21 percent, the real cost of numerous consumer goods is significantly higher, aggravated by the weaker rial.

Iran's long overvalued currency, which the central bank allowed to weaken in recent months to shore up its foreign currency reserves, has almost halved in value over the past year.

The rial tumbled in black market trading to a new record low against the dollar, news agencies said earlier this week, with the unofficial rate in central Tehran at around 20,500 for one greenback.

All imports, notably electronic equipment such as computers, mobile phones, televisions and fridges, have shot up in price by more than 50 percent.

"Luckily I bought my laptop two weeks ago. Its price has since gone from 15 million rials to 24 million rials," said Ahmad, a retiree. The minimum monthly wage in Iran is around seven million rials.

The price of certain types of imported medicine has risen by around 30 percent, and foreign books have become unaffordable for most Iranians.

"Before, books costing 20 euros would sell for 300,000 rials. People would buy them rather reluctantly. But now they would go for 500,000 to 600,000 rials, and no one will pay that," said one vendor, who just cancelled his latest order of English and French books.

For all these products, importers had to buy their currency on the parallel market, now a black market where prices have soared as the government limited the official sale of foreign currency to importers of essential goods, particularly industrial ones.

Sanctions have also choked most of the banking channels for trade in dollars or euros, making it difficult for the many Iranians who have family abroad to send or receive money.

The Iranian diaspora is estimated at nearly five million people, with the majority based in the United States, Canada and Europe.

Even the most well-off are feeling the pinch of the crisis.

"It becomes really difficult," says Alireza, a doctor who must send a monthly $10,000 stipend to his wife and two children living in the United States.

The currency crisis means this transfer now costs him 175 million rials, compared to 125 million three months ago, while the parallel market exchange offices he turned to after the West imposed sanctions in 2010 are now under pressure from the authorities.

Another area affected by the crisis is international tourism. Millions of Iranians spend their vacations outside the country each year, mainly in Turkey, Thailand, Dubai, but also in Europe, Malaysia, Indonesia and India.

"We planned to go to Bali for Nowruz (the Iranian New Year, March 21), but I told my wife that if the dollar remained at 20,000 rials, we should cancel the trip," said Mohsen, manager at a luxury watch store.