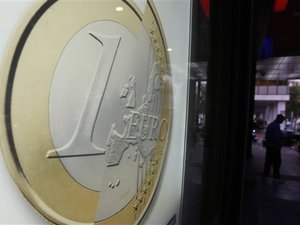 Europe is getting tougher on government debt. After more than two years struggling to rescue financially shaky governments, leaders of the 17 countries that use the euro are ready to agree on a treaty that will force member countries to put deficit limits into their national laws.

At first glance, it seems logical — after all, the crisis erupted after too many governments spent and borrowed too much for too long.

But a number of economists — and some politicians — say the focus on cutting deficits is misplaced and that more fundamental problems are being left unaddressed.

It's how the euro was set up in the first place, they say — one currency, but multiple government budgets, economies moving at different speeds and no central treasury or borrowing authority to back them up.

Until those institutional flaws are tackled, the economists say, the euro will remain vulnerable. So far, Greece, Ireland and Portugal have turned to other eurozone governments and the International Monetary Fund for emergency funds to avoid defaulting on their debts.

Nonetheless, European leaders are pushing a new anti-debt treaty as the leading edge of their effort to reassure markets. European Union leaders hope to agree on the treaty's text at a meeting starting Monday, and sign it by March.

The proposed treaty pushes countries to limit "structural" deficits — shortfalls not caused by ups and downs of the business cycle — to a tight 0.5 percent of gross domestic product or face a fine. That comes on top of other recent EU legislation intended to tighten observance of the eurozone's limits: overall deficits of 3 percent of GDP and national debt of 60 percent of GDP.

European leaders are also urging countries to improve growth by reducing regulation and other barriers to business.

Yet economists like Jean Pisani-Ferry, director of the Bruegel think tank in Brussels, says it's striking that governments are focusing on budget rules, given Europe's earlier experience with them. An earlier set of rules were largely ignored at the behest of France and Germany in the first years after the euro's 1999 launch.

And some of the countries that now are in the deepest trouble — such as Spain and bailed-out Ireland — stayed well within the debt limit for years.

"This suggests that the simplistic view — that a thorough enforcement of the rules would have prevented the crisis — should be treated with caution," Pisani-Ferry wrote in a recent article for Bruegel.

Some European politicians are also voicing doubts about focusing primarily on deficits. They include new Italian Prime Minister Mario Monti, who has warned that growth is the real answer to shrinking debt in the long term. International Monetary Fund head Christine Lagarde has urged a broader approach. She calls for a willingness to share the burden of supporting banks and other financial risks so troubles in one country don't become a crisis for the entire currency bloc.

Here are four reasons for concern cited by economists — but not yet on the summit agendas of the eurozone's leaders.

NO COMMON BORROWING: Without a central, pan-European treasury, there's no steady central source of support for eurozone countries that run into economic or financial trouble. Many economists say issuing jointly guaranteed "eurobonds" would make sure no one country would ever default and governments would always be able to borrow. Governments would give up some of their sovereignty, allowing review of their spending and borrowing plans, to get the money.

Pisani-Ferry argues that this would protect governments from the kind of self-fulfilling bond market panic fueled by fears of default, that pushed Greece, Ireland and Portugal over the edge.

Yet the idea of more collective responsibility remains unpopular in prosperous EU countries such as Germany, Finland and the Netherlands. They can borrow cheaply due to their strong finances and would likely pay more to borrow at the rate that includes the shaky ones.

Eurobonds would also likely require a time-consuming change to the European Union's basic treaty — which currently bans members from assuming each other's debts. There would also have to be a mechanisms in place to stop countries with shoddy finances from borrowing too much.

Opponents say that's unrealistic. "If you have mutual debt responsibility, and freedom of each country to borrow, then each country can drive the eurozone into bankruptcy," said Kai Konrad, managing director of the Max Planck Institute for Tax Law and Public Finance in Munich.

BANK BAILOUTS: Europe currently has no safety mechanism that would stop a country from sinking under the weight of having to bail out banks based in that country.

At the moment, each country bears the brunt of rescuing its own banks. This can create serious problems in a crisis.

For example Ireland's loosely regulated banks borrowed heavily and loaned out money freely for speculative real estate projects. When the real estate market collapsed and the loans were not paid back, the Irish government had to step in to guarantee the bank's bonds — and quickly went broke. Ireland had a very low debt level of only 25 percent of annual economic output in 2007. As bank losses moved to the government's balance sheet, by 2011 debt hit 106 percent of annual GDP. The country remains on EU-IMF life support.

Simon Tilford of the Centre for European Reform in London draws an analogy with U.S. insurer AIG, which was bailed out by the U.S. federal government in 2008. AIG was incorporated in the U.S. state of Delaware, yet Delaware did not go bankrupt handling the rescue. The central government stepped in.

TRADE IMBALANCES: Economists point out that gaps in how well countries compete and trade with one another have steadily widened since the euro was created.

Greece's current account deficit — the broadest measure of trade — is even worse than its budget deficit. It buys and borrows far more than it sells and earns abroad.

Normally trade imbalances are evened out by fluctuating exchange rates — but that can't happen within the euro. Countries can improve their competitiveness by doing what Germany did in the 2000s — cut labor costs to business by cutting general unemployment benefits. They can cut red tape and taxes. But that takes years.

Meanwhile, the region is also hampered by an inflexible pan-euro interest rate. Low interest rates — set by the European Central Bank to see Germany and France through stagnation in the early 2000s — were too low to control wage inflation and reckless borrowing in places like Greece and Ireland. Wage costs and debt levels rose. Competitiveness and exports declined, weakening the economy and undermining government finances.

CENTRAL BANK POWERS: Yet another structural issue is the limited power of the European Central Bank to support governments.

The bank resisted calls to buy larger amounts of government bonds. That resistance observes the spirit of the EU basic treaty, which forbids the central bank from financing governments.

But it's a constraint that central banks such as the U.S. Federal Reserve and the Bank of England don't have. They can buy up their country's debt, a move that can push down government borrowing costs and reassure markets the state will always pay its debts.

He notes that Britain has more debt than Spain, 81 percent of GDP versus 67 percent, yet borrows at just over 2 percent annual interest for its 10-year bonds, while Spanish debt for the same period has a 5 percent-plus interest rate. One difference: markets know the Bank of England has the ability to support the government in a crisis by buying bonds and driving down interest rates.

Many of these issue were raised before the currency was launched in 1999, then got less attention.

Tilford says that "the tendency has been to say the currency union needs all these things but in practice it's not necessarily the case" so long as countries obey budget rules and manage their finances well.

"It's become harder to maintain that kind of argumentation now, given how bad things have got."