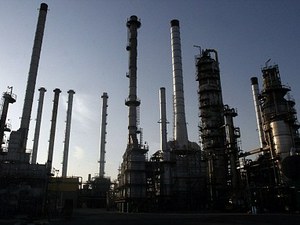 The National Iranian Oil Company has no firm projection of the impact on world crude prices of a looming EU embargo on Iranian exports, its managing director said in comments published on Saturday.

Ahmad Qalebani told the government newspaper Iran that the size of any hike in prices would depend on the European Union's success in finding alternative output to make up for Iranian deliveries lost to the market.

"One cannot have an accurate prediction of prices, but it seems that in the future we will witness 120 to 150 dollars a barrel," Qalebani said.

He said the reason that EU foreign ministers had decided on Monday to give the bloc's existing purchasers of Iranian oil until July 1 to find alternative suppliers was to try to minimize the impact on prices.

"The reason for this six-month postponement is to buy time -- they want to use this opportunity to pass the peak winter season and find a suitable replacement for Iranian oil," he said.

"If the Europeans successfully achieve it, then there won't be any price hike. But if they don't, then certainly there will be price hikes."

Iran's Oil Minister Rostam Qasemi said in late December that EU and other Western sanctions against its exports could see prices soar to $200 per barrel.

In New York on Friday, benchmark West Texas Intermediate crude for delivery in March closed at $99.56 a barrel. London's main contract, Brent North Sea crude for March, finished the week at $111.46 a barrel.

An International Monetary Fund report released on Wednesday said that a somewhat broad embargo on Iranian oil, effectively taking 1.5 million barrels a day of Iran's exports off the world market without another producer compensating for it, risked pushing the market price up 20-30 percent, "about $20-30 a barrel currently."

The IMF said that if Iran made good on its threat to retaliate by closing the Strait of Hormuz -- the strategic oil waterway at the mouth of the Gulf -- there could be a far greater impact.

"A Strait of Hormuz closure could trigger a much larger price spike, including by limiting offsetting supplies from other producers in the region," the report said.

The EU imported some 600,000 barrels per day of Iranian oil in the first 10 months of last year -- equivalent to nearly 20 percent of Iran's exports -- making it the key market alongside India and China.

The EU imposed an immediate ban on Monday on all new contracts for Iranian oil but gave the bloc's existing purchasers -- principally Greece, Italy and Spain -- the grace period to find new suppliers.

The bloc's decision came in response to a U.S.-led drive for tough new economic sanctions against Iran to punish it further for its defiance of repeated U.N. Security Council ultimatums to suspend uranium enrichment to allay Western concerns over its nuclear ambitions.

The other big purchasers of Iranian oil -- energy-hungry China and India -- have made clear that they will continue to buy.