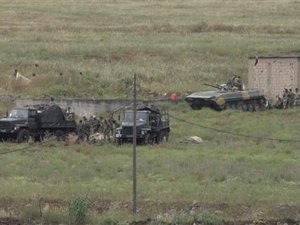 Several families in the northern Lebanese border towns of Mashta Hassan and Mashta Hammoud have received information that two Lebanese citizens and a Syrian man were killed and two Syrians wounded when they came under gunfire on the al-Jaafariyat bridge in the Syrian town of Tal Kalakh, Lebanon’s state-run National News Agency reported Sunday, as another report spoke of a 9-strong Lebanese armed group led by an Iraqi man.

NNA said the “unconfirmed reports have sparked a major tumult in both border towns, to which local and foreign media outlets have flocked in a bid to scrutinize the authenticity of these reports.”

The two wounded Syrians, who were detained by the Syrian authorities, have not been identified yet according to the reports.

The residents of the two Lebanese towns “are still trying to confirm the reports, although the aforementioned individuals have recently vanished without making any contact with their families,” NNA said.

Meanwhile, OTV reported that “an armed group led by an Iraqi man and comprising nine Lebanese members had infiltrated Syria through the Lebanese-Syrian border.”

“The Syrian army ambushed the group on the Tal Kalakh-Safita intersection (in Homs province), killing at least 4 members of the group and wounding several others,” OTV said.

For his part, head of Mashta Hammoud Municipality Naji Ramadan told LBC television that “it is normal that Lebanese individuals be killed in Syria given the non-demarcated border areas and the spike in violence” in revolt-hit Syria.

Ramadan confirmed the death of “a Lebanese and a Syrian,” declining to give further information.

"The security forces of Syria clashed … with a terrorist group trying to infiltrate the country across the border with Lebanon in the Tal Kalakh area and killed three of them," the agency said.

At least 5,400 people have been killed in a crackdown by the Syrian regime on dissent since March, according to the United Nations.

The regime does not recognize the scale of the protest movement that erupted in mid-March, insisting it is fighting "terrorist groups" seeking to sow chaos as part of a foreign-hatched conspiracy.

Could this be the beginning of the end of the game that Gabby & Co. have been predicting since their mothers delivered them? Dr. Samir Abou Hazzeh must be proud of them, and more so must be their mothers.

when an army has been killing people by the hundreds since a year, don t they expect people to take arms? now they call these people "terrorists"...
which people would let himself killed?
ah! maybe M8 as they seem to side with this regime and deny people to defend and claim their rights....
and cookie will of course let his family get killed without saying a thing...

@Cookie_blind:Ghalyoun and his bunch of Army Generals are outside same as why Harriri/Khadam are outside for the exact reason of you heard few days ago about Riffi and Hassan plots...When you have Armed Vs unArmed then you get assassinated by the Armed period because the moment you think of Arming then you bear the responsibility of security.
Over 50yrs ago whenever Syrian/Lebanese relations were getting lukewarm the Lebanese side was always paying the price thru shutting down the borders on the Syrian side, attacking the towns at the Borders and etc...this is fact and prior to any 1968 or 1975 wars.

Too bad they didn't volunteer to die for their country by fighting the Syrian occupation here at home, when fighting was the honorable thing to do. But they chose to kowtow to the occupiers because this was in Rafic Syria's best interest as he was preoccupied with scheming against other Lebanese while filling his pockets with filthy money together with the other embodiment of filth Walid Jumblat and handing the key to the Beirut to Ghazy Loubnan, his friend, may both of them rot in hell.

@Cookie_kid: Why Shah Iran is in exile? why Khadem is in Paris, Why Harriri is in Paris? you won't know the answers because you're either busy saying :"Me Eat Cookie" or blind. Because Riffi and Hassan were about to follow those assassinated by HA and Syria.

Stop measuring with two scales ... syrian people and palastinian people are coming under oppression and they need to be helped. Why is what is permitted in the south forbidden in the north??? We either condemn it on both fronts or support it on both fronts. They are all arab brothers and are being killed by an opressor.

Didn't Hariri's Al Qaida - Akkar and Tripoli Brigades chant: bel ro7, bel dam, nafdik ya cheikh sa3d? I didn't think their were joking, and this is proof for the cynics among us.

@ Cookie monster, as usual , an FPM dumb response, Mustaqbal behind this... this is an automatic reflex observed in typical sheep FPM followers that cannot analyse something according to what their brains is capable of producing of answers, instead, taking back the answer of a cowardly , insane and extremely senile old man. You never heard of men wanting to fight for a cause that wasnt theirs and died for it? let me give you an example, Che guevara, was also paid by the Russians ( according to your logic ) , to try to help the oppressed in African countries against US imperialism. He did not have a mind of his own. So as the millions of international soldiers during the WW1 and WW2, are all paid by their politicians , to screw up the world ? You are the only one in this world that fights without beeing paid ya grandizer

@ cookie_monster, lol , Che Guevara had a regular army perhaps? and maybe the syrian cause is not a cause for you at all? and what were the syrians involved for 30 years in the lebanese civil war? Heroes? you are completely out of touch with reality and have no respect for people's decisions. The northern people, whether HELPED by mustaqbal or not, have the right to defend themselves when the Lebanese army doesnt act and let the syrians blow up villages and kill our people. By the way, Hezbollah sent many fighters abroad, like Iraq and Egypt. THEY WERE CAUGHT and Nasrallah admitted their existence. What were they? nothing more than mercenaries if i use your definition of mercenary. Trust me im growing up, good thing that your not my role model :) neither is your master the runaway bride :)