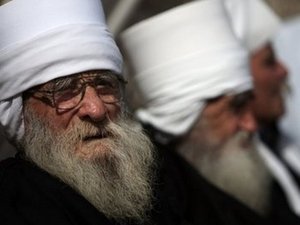 Around 300 Israeli Druze are for the first time to be allowed into Syria for a religious visit after they were given permission by the interior ministry, the head of Israel's Druze community said on Thursday.

The visit will see a large group of Druze religious leaders travelling to Syria for a week-long visit during which they will tour pilgrimage sites and visit relatives there.

Syria and Israel remain technically in a state of war, and until now, the Druze, like all Israeli citizens, have not been permitted to enter an "enemy" country.

"This is a very important decision, it's a precedent," Wafaq Tarif told AFP. "It is the first time that the Israeli interior ministry has allowed a group of Druze religious leaders to travel to Syria."

Interior ministry officials were not immediately available for comment.

Tarif said the group would leave next week and cross into Syria via Jordan.

Until now, only Druze residents of the occupied Golan Heights, most of whom do not have Israeli citizenship, have been allowed permission to visit Syria either for weddings or for religious reasons.

There are around 120,000 Druze living in Israel, most in the north of the country.

In the Golan Heights, which Israel unilaterally annexed in 1981, there are some 18,000 Syrian residents, most of them Druze, the vast majority of whom have refused to take Israeli citizenship.

Followers of a breakaway sect of Islam concentrated in Israel, Syria, and Lebanon, the Druze are not considered Muslims by most of the Islamic world.(AFP)