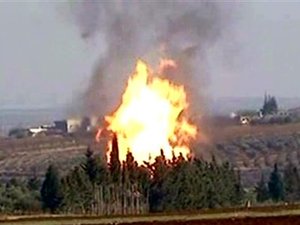 At least 95 civilians, six members of the security forces, and two deserters were killed in violence across Syria on Monday, activists and a rights group said.

Seventy-two people were killed in the central opposition bastion Homs, fifteen in the southern cradle of the uprising Daraa, six in the restive countryside around Damascus and two in the flashpoint northwestern province of Idlib, the LCC said.

Near the capital, meanwhile, troops penetrated Rankous, 40 kilometers north of Damascus, after shelling the town which had been encircled for the past six days, the Observatory said.

Security forces also stormed the flashpoint city of Homs, killing a family of six and a young girl, who was hit by gunfire from a checkpoint in the Karm al-Zeitoun district, according to the Britain-based rights group.

Another civilian was killed by gunfire in Karm al-Zeitoun, and one in the neighborhood of al-Khalidiyeh, also in Homs.

Four civilians were reportedly killed in the Qussour district, while another was hit by machinegun fire in Baba Amro and a man was shot dead by sniper fire in the city's Wadi Iran quarter.

A young man was shot dead in town of Qusseir in the Homs province, the Observatory said.

It claimed that unidentified assailants killed a doctor in Shammas, also in Homs, while the state news agency said Dr. Mustafa Safar was shot dead by a "terrorist group."

Separately, rebel soldiers "attacked a minibus carrying six security officers on their way to make arrests in Hirak, killing all of the passengers," said the Observatory, in statements received by Agence France Presse.

Government forces responded by deploying two tanks which opened fire and killed three civilians in the southern city of Daraa, it said.

Elsewhere in the province of Daraa, cradle of the 10-month uprising against President Bashar al-Assad's regime, a civilian was killed by indiscriminate gunfire in the town of Saida, the watchdog added.

Near the capital, the Observatory and activists at the scene said deserters pulled out of Rankous as the army moved in. The military assault reportedly claimed the lives of two deserters and left dozens of civilians wounded.

In the eastern suburbs of Irbin and Hammouriyeh, snipers were "shooting at everything that moves," the watchdog said.

Armed clashes also erupted between the army and mutinous soldiers in Hirak, further south in Khirbet Ghazaleh and Saida, as well as in Nassib, a village on the border with Jordan.

Meanwhile, the Syrian state news agency reported a "terrorist group" attacked a gas pipeline in Homs province, near the border with Lebanon.

"An armed terrorist group has targeted a pipeline between Homs and Banias, near the town of Tal Kalakh, in a sabotage operation," SANA reported, without elaborating.

Syrian cities have been subjected to energy shortages for several weeks, which the authorities blame on "armed terrorist groups."

The opposition says the regime carries them out to punish protest hubs.

Since mid-March, Assad's regime has faced an unprecedented protest movement. The United Nations estimated at the start of January that more than 5,400 people had been killed in the ensuing crackdown on dissent.

would it not be ironic if syria is liberated on the march 14!!!!

More science fiction from Naharnet and Agence France Presse, Syria is peaceful and calm, in fact the troubles were over before Tuesday November 15 2011 as predicted by General Aoun, what he predicts always come true.

It is almost always the government forces (in power) around the world who are mostly responsible for the killings and TERRORizing of the population, not the "terrorists" fighting the governments.

Gabby, allouchi, shab, thepatriot, peace and other falakiyouns, you were right when you predicted, among other things re. Syria, that the game is over.

Unless this Human Rights thingy is a joke! You let us know, oh great warriors.

@Cookie_blind: How many times the GRAD rockets landed in the heart of Jounieh and Ashrafieh by the Syrian Army on the head of innocent Civilians instead of shelling military positions? Do you think the blind soldier on the Tank might have missed his Target as usual and hit the pipelines? Same as shooting the 16yrs old? Same as shelling Tripoli? same as shelling Zahle? and so on..

For all your evil work in Lebanon I pray that not a single guilty Syrian is spared, may you kill each other as you have made us Lebanese people do. As for the innocent demanding their freedom, may almighty GOD help you.

"may you kill each other as you have made us Lebanese people do"... "Joe" You have to be an Israeli! The Zionists were mostly responsible for us killing each other. NO LEBANESE would want to see the Syrians kill each other including the Lebanese Forces because it could very well spill into Lebanon. This is how the Israeli colonial enemy has survived in the middle east, but your years are numbered? Throughout history, Divide and conquer never lasts for long.

"may you kill each other as you have made us Lebanese people do"... "Joe" You have to be an Israeli! The Zionists were mostly responsible for us killing each other. NO LEBANESE would want to see the Syrians kill each other (including the Lebanese Forces) because it could very well spill into Lebanon. This is how the Israeli colonial enemy has survived in the middle east, but your years are numbered? Throughout history, Divide and conquer never lasts for long.

bashar tried to send his family abroad, proof that he is not sure now of his "victory"...

and to cookie: it is normal they write "terrorists" because the info comes from SANA, which is not the most objective information source....

Exaggerated unverified figures posted by this Lebanese newspaper and the posts by its readership only Demonstrate how bloodthirsty and jingoistic many Labanese have turned when it comes to the Syrian issue. I just want to remind you all, during the war, no population was as evil, savage, and barbaric as the Lebanese towards each other. All kinds of atrocities (genocide, massacres, decapitulation, mutilation, kidnapping) were committed by the Lebanese themselves against each other and they did not need any foreign side to foment the grudge and killing. And now, ironically enough, we still see the murderers themselves on TVs still leading the Lebanese 'civilized' population. WOW very admirable!!