EU Fiscal Pact Under Fire Before it Even Exists 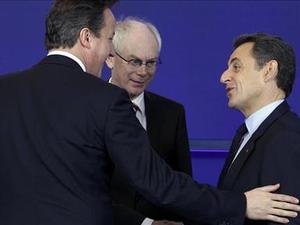 Already dismissed as a "waste of time" and "harmful" by two foreign ministers, the "fiscal compact" that EU leaders hope to conclude at a summit Monday has run into criticism before even being agreed.

The German-led accord, designed as a tighter set of budgetary rules to beef up the ailing and much-infringed Stability and Growth Pact, was set to be agreed by 26 EU leaders later Monday, with Britain remaining on the sidelines.

It aims to enshrine German-style discipline across Europe, with states committing to strive for a balanced budget with almost automatic punishments if they stray from the path of fiscal rectitude.

The pact -- officially entitled the "Treaty on Stability, Coordination and Governance" -- is widely seen as Chancellor Angela Merkel's price for pouring in billions of euros (dollars) to EU bailout pots.

But the foreign ministers of two Eurozone states have already slammed the draft text in unusually undiplomatic terms.

Erkki Tuomioja, Finnish Foreign Minister, described it as "at best necessary and at worst harmful" in an interview with the Financial Times.

He said the so-called "golden rule" insisting on balanced budgets was designed to appease German public opinion, hostile to the idea of seemingly never-ending handouts to debt-wracked countries.

The pact was "about Germany’s domestic policy needs" and "we should not be taking orders from anybody," said the minister.

Meanwhile, Luxembourg's Foreign Minister Jean Asselborn dismissed it as a "waste of time" in comments to Germany's Der Spiegel newsweekly.

Several others in Brussels and further afield believe that Europe should not be wasting efforts tinkering with its fiscal rules in the midst of a debt crisis that threatens to tip the entire continent into recession.

The European Commission, which has found itself sidelined during talks on the pact, is unenthusiastic and senior members of the European Parliament have also raised serious doubts.

"The fiscal pact is not a solution. Most of what it proposes is already in law," Guy Verhofstadt, former Belgian prime minister and head of the liberal group in the European Parliament, told German daily Die Welt on Monday.

"As long as we have not worked out how governments in Italy or Spain can again borrow at reasonable rates, we will not escape the crisis," he said.

Poland's prime minister has also said he will not sign the pact unless Warsaw and other non-euro governments get a bigger say in decision-making at special euro summits.

Trade unions meanwhile believe that the fiscal pact will have very real consequences and plan a "European day of action" on February 29 to stress their view that the rules will "institutionalize austerity."

However, despite widespread doubts, almost all countries are due to sign up to the text.

Behind the scenes, many hope that a tougher set of fiscal rules will persuade Germany and the fiscally conservative European Central Bank to loosen up its cash taps.

A high-ranking official said that Merkel in private "is saying now that she will live up to her responsibilities ... to boost the amount in the bailout pots" from 500 to 750 billion euros.

"But she says that she won't do this for nothing, because that would entail internal political risks. She wants a genuine budgetary pact," said the official, who declined to be named.