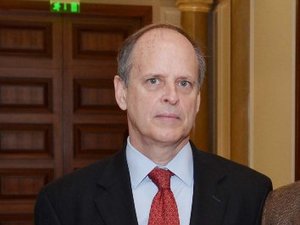 U.N. Special Coordinator for Lebanon ad interim Robert Watkins on Monday briefed Interior Minister Marwan Charbel on the preparations for the next report on the implementation of U.N. Security Council Resolution 1701, which ended the July 2006 war between Israel and Hizbullah.

The report is due to be presented to the Security Council at the end of February.

“While appreciating Lebanon’s expressions of commitment to 1701, I relayed the U.N.’s expectations that Lebanon would continue to meet its international obligations under all relevant Security Council resolutions,” Watkins said after his meeting with Charbel.

He also discussed with the minister the security situation in Lebanon, hoping “the necessary measures would be taken to safeguard Lebanon’s security and stability, particularly in light of the developments in the surrounding Arab region.”

The two men also discussed the interior ministry’s preparations for the 2013 parliamentary elections and the situation in Lebanon’s central prison of Roumieh, which Charbel had inspected last week.

he actually asked lebanon to spare zionist entity from our wrath.