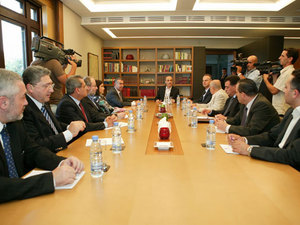 The Lebanese Forces parliamentary bloc urged the government on Monday to take a firm stand against Syria’s repeated violations of Lebanon’s sovereignty in the North and Bekaa.

The bloc made its statement after holding a meeting headed by LF chief Samir Geagea.

Two Lebanese and Syrian have been missing for a week after they traveled to Syria to visit relatives.

Unconfirmed reports said that the three individuals have been killed.

The LF bloc also praised the Syrian National Council’s open letter to the Lebanese people, saying that it meets Lebanese aspirations that had not been met since their country’s independence.

The Syrian National Council had proposed, among other issues, that agreements between Lebanon and Syria be revised.

Addressing Culture Minister Gaby Layyoun’s refusal to mention the 2005 Cedar Revolution in official school history books, the Lebanese Forces said: “This goes against the will of the majority of the Lebanese people.”

Layyoun had stated on Sunday: “I don’t recognize the Cedar Revolution and it should not be mentioned in history books because it was backed by foreign powers, specifically the United States.”

Layyoun is a worthless piece of shit, a SSNP at heart, in fact, half of FPM mps are former SSNP members or supporters. Not to mention Abboud as well, Nahhas a communist-SSNP lover. And most importantly , a new reconversion which are Sehnaoui and Imbassil. I would like to ask FPM followers here, werent we all together in the martyr's square on 14th march 2005? united for one purpose? how can you even think of not putting this in school history? Do you really think Mr layyoun ya hayawen that its only because of the USA that Assad was forced out of Lebanon? or because more than 2million people were chanting together , christians and muslims , slogans against syria? and had a deep rage which could have got their army in very big trouble had they stayed? we all were ready to shoot any syrians in front of us back then, and we were together, this is what made him left.

As well as the nonsense of USA helping us. They never helped us and never wanted to do so. If the syrian army had stayed, what would have the USA done? they didnt even act in Syria while its chaos over there right now. So lets cut the bullshit, we all know what drove the syrians out, an it was our national unity. And what drove them back in, was our national stupidity.

LOL... didn t aoun say that there were no more prisonners in syria?didn t he also ask to the mothers of the dissappeared to turn the page?
so M14 really thinks that M8 mafia will ask? dream...they don t give a sh.. to the rights of the lebanese citizens! all what concerns them is steal the state, preserve there arsenal and discover the fate of sadr...
and the rest, lebanese can die...

Bring our boys back.

What an amazing cultureral minister, maybe he misses the Syrian army. Or maybe he does not think too highly of his own people?

The bloc met to reveal a new wave of predictions, among which will be a repackaged "imminent fall" of the Assad regime, which Dr. Samir Baddoyergheh has been predicting since he rightly discovered his skills in reciting stupidities and pontificating his out of this world hallucinations.

the filthy zionist information war department is still hallucinating about people in syria, while there is no evidence of that.

to the ahbal : go and tell that to lebanese mothers, you scum...
only good to speak nonsense just like the terrorist party you support... but not for long, they ll soon go down the drain like your beloved syrian regime