Tokyo Stocks Edge Up as Euro Rises against Yen 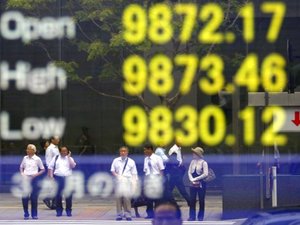 "Earlier, players were anticipating a slide in the euro back below 100 yen during Tuesday's stock trading, but the euro has since recovered," he told Dow Jones Newswires.

But the yen's strength against the dollar prompted Japanese Finance Minister Jun Azumi to reiterate the authorities' resolve to intervene.

"If there is excessive volatility or really speculative movement, I will be vigilant against it, and I will take decisive steps if necessary," he told a regular briefing.

The safe haven Japanese currency soared overnight as investors shunned risks, while EU leaders signed a new treaty aimed at ending deficits and pledged to reach a deal over a new bailout for Greece.

Analysts had expected a 2.8 percent gain.

Japan's jobless rate edged up to 4.6 percent in December from 4.5 percent in the previous month while household spending rose 0.5 percent, the first increase since the disaster.

But beverage giant Kirin Holdings, which replaced presidents of three of its core companies, fell 1.89 percent to 934 yen.

IT firm Canon lost 4.22 percent to 3,290 yen on news its chief executive and chairman, Fujio Mitarai, will return as president from March.

The company said there was no other candidate to take the job after the incumbent Tsuneji Uchida steps down in March.