Aoun: Those Who Plundered Lebanon Will Meet us in Court 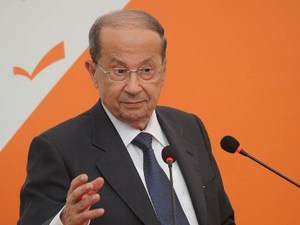 Timeline
Hashem: If it weren’t for Aoun and the Change and Reform bloc, the people’s concerns would have been forgotten. 8 years
MP Abbas Hashem: Aoun did not accuse anyone, but he based his claims on facts. Our people are entitled to find out the truth after they have been robbed. The criminals are now attacking the most honest people in the country. 8 years
Aoun: I am the one who distances himself from base rhetoric, besides, they cannot get any lower because they already are at the lowest possible level. 8 years
FPM leader MP Michel Aoun after Change and Reform bloc weekly meeting: I remind the people that I raised my voice to say that Lebanon is being robbed and it is not broken. 8 years

Free Patriotic Movement leader MP Michel Aoun stressed on Tuesday that Lebanon is not a broken country, but it has been robbed.

He said after the Change and Reform bloc’s weekly meeting: “Those who plundered it will meet us in court.”

Aoun had accused former Prime Minister Fouad Saniora of committing financial violations in the Nation Lottery in 1996 when he was finance minister, saying he squandered LL5 billion from the state treasury.

The MP added: “I am the one who sought to distance himself from the base rhetoric and they cannot stoop any lower because they already are at the lowest possible level.”

He made his statements in reference to the criticism he had received over his press conference on Friday during which he accused the entire political class of conspiring against the Change and Reform bloc ministers.

The "Benny Hill Show" of Lebanon...The hateful Aoun and his babbling...

OMG it is Tuesday again. The weekend psychosis session was enough to cover for today. My eyes are roling back in my head. Where is the lithium??

Funy that... I always just keep on reading baseless comment
I realy do question the intellectuality of these comments!! Im understanding wat u r dealing with oun .

the filthy zionist information war department is preparing for a new wave of attack against patriotic lebanese christian leader.

so far they managed only to dig up an old comedy show from england.

Robbed by you and your son in law

why general is so mad?????
assad is going down and hassoun is refusing his demands,
a few days ago he sent one his MP BOY( HIKMAT DIB) to meet hassoun and ask him to interfere for the christians of hadeth,now 50 pct of the lands in hadeth is ownned by shia, and hassoun refused to interfere in the "free market"so his"waraket el tefehoum" is working very well like all his....

Irrefutable proof coming very soon!!! as soon as we finish downloading a pirated copy of Photoshop on Sehnawi's *NEW* *patented* turtle fast internet connection and make the necessary alteration to the documents. Mark my words we have the most magnificent imaginations and creative minds working for us.

Irrefutable proof coming very soon!!! as soon as we finish downloading a pirated copy of Photoshop on Sehnawi's *NEW* *patented* turtle fast internet connection and make the necessary alteration to the documents. Mark my words we have the most magnificent imaginations and creative minds working for us. As usual the general will present the proof on Al-Manar beacon of everything foolproof.

Cookie_Wookie aka idiot boy, Aoun's current allies accused him of embezzlement for fifteen years, they forgot all about that when he agreed to become their servant and betray everything he once said and stood for.

Cookie, say what??? evidence that Aoun is CRAZY...dude just listen to him talking and watch how he acts LOL
Of course I can ignore him but I chose not to because he's an enemy to freedom and Lebanese prosperity.

at least Benny Hill is funny, Aoun is a small time crook and needsa to be hanged from the nearest tree in downtown BEirut

or as his "liberation war" is it only revenge he is asking for? ...

but i guess he ll do nothing, he kept on saying he has evidence, but we are still waiting for them!
parole parole parole....

Cockeat monster is too busy being 18 years old. In 1989-1990 he is not aware that Der General the geriatric orange douche bag was the instigator of two criminal wars ( niether of hich could be won ) . But these orangino yellow retards dont recall anything like aounzheimer

cookie...don't get nervous because of zionist information war department provocations.

liberation war? LOL!
it is better defined as a revenge war... liberation was used to make it look noble, but it was only question of a revenge after he was promised the presidency by the syrians who at the last moment let him down .......

I just wanna say this because you people are burning me.....

Go to Asfourieh. You will be better of thsn going to court.

Aoun is so disgruntled , His Iranian Rials have dropped in value along with his Syrian Lira holdings .
He accepts bribery from foreign goverments , then lectures us on integrity . Siniora is as honest as the day is long in June .

@Cookie_blind: How does this man set an example and play a role model or even speak about a court system meanwhile he is a double standard person because he is allied with NON PAYING Electricity Shia called Hezb?

Are there no insane asylums in Lebenon ...why is Aoun still walking the streets.

Agoor ...the French will not take him a second time, his going to have to make a run to the Iranian embassy.

C Monster ....Aoun was not exiled, he was not imprison, he was not assassinated ...he just F**king ran away, with his tail between his legs and as much moony as he could carry. He left every body ells holding the bag!

@ Cookie and aragon, no need for fists and kicks, what a low level of talk, keep it up with conversation rather then engaging in useless rhetoric , as for AOUN as usual all is talk, show us your evidence of thieves and we will gladly follow you to the court of justice to try them. But like i said, u are all talk, power without justice is madness, and justice without power is worthless. So which one will you be? from what i know, you have the governement , the power and the hezb. What are you waiting for? unless you are bullshitting us as usual. So shut up and go take your insuline shots.

Aragon it's okay habibe don't be angry and rude. No need to be so impolite also. I know it can be quiet difficult for personalities such as your to accept the truth. Just remember the truth shall set you free mate. You cannot manipulate history nor the future. The truth remains and the future is another story. Wise men learn from history. You are obviously neither wise nor humble. Take a breather or maybe visit an oxygen lounge sounds like your blood needs some clean oxygen habibe.

TO COOKIE MONSTER
Please do me a favor and ask your buddy Aoun and his wife what did they do with all the gold bracelets, chains etc.. that so many Decent and good faith Lebanese citizens gave to Aoun when he was occupying the Baabda palace? I don't think all this gold given to him evaporated or Mr and Mrs Aoun left it in Lebanon when they ran away his tale between his legs and went hiding at the French embassy then went into exile in Paris.
OOOOh I know I guess he used all that gold to continue the resistance from Paris while his men were being massacred by the Syrians
RIGHT??
Get real dude!!!!

The level of corruption in Lebanon is so vast and open i doubt their are any public figures clean. the Question is how we can put a place a method to catch and hold accountable those that commit corruption, without politcal interference regardless of the sect.

the only thing zionist information war department hates more than shia people is maronites who don't ally with them.

the Filthy Zionist War Department has hired your mother to get a little filthier. She is consulting on a pipeline that would connect hassouna's sewer to your moms uterus. Apparently they are a close fit and they will use wi2am wahhab's head to excavate further

it will end when he frees lebanon from all you crooks...the same way putin put all the crooks in jail all made them flee countries is the same thing that is coming to you

it will end when you crooks end your theifing...the same way Putin jailed and kicked out all the crooks in russia , the same thing aoun iis going to do to you crooks!