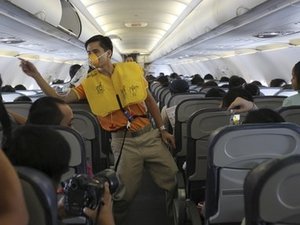 The airline had created a YouTube sensation, as well as a storm of criticism earlier this week with an in-flight safety demonstration using pretty young female cabin attendants toe-tapping to a Lady Gaga tune.

Mother-of-two Carol Ignacio, a passenger on the morning flight to Davao city, whipped out a video camera as three male flight attendants pranced along the aisles to the new-wave group Men Without Hats' 1980s hit "Safety Dance".

"It was okay, they managed to stop me nodding off," Ignacio told Agence France Presse.

After the plane reached cruising altitude, the young male staff showed their dance moves while giving instructions about oxygen masks, lifejackets and how to find the exits.

The women crew's dance, filmed by a passenger earlier in the week, had more than seven million hits on YouTube by Friday.

Cebu Pacific vice president for marketing Candice Iyog, who was on board Friday's flight, told AFP the company will decide next week whether to roll out the dancing crew program.

"The reaction was generally very good," she said, rejecting criticism of the dance routines.

"Our Cebu Pacific crew are having fun doing these activities."

Cebu Pacific is not the first airline to use its staff in unusual ways to attract the attention of passengers.

But the Cebu Pacific dance moves have not gone down well everywhere in the Philippines.

Several legislators and the union for the country's flag carrier Philippine Airlines reacted furiously to the original safety demo, saying it was demeaning to women.

The women's political party Gabriela said the routine was "a cheap promotional gimmick" and branded the airline "a purveyor of sexism and machismo."

And the Philippine Airlines cabin crew union said the video did not help the union's campaign to lift a company policy that forces female flight attendants to retire at the age of 40.

"This gender-insensitive packaging is a throwback to the unenlightened past during the 50s and 60s when 'stewardesses' were made to wear hot pants and mini-skirts to appeal to the dominantly male business travelers," it said.(AFP)