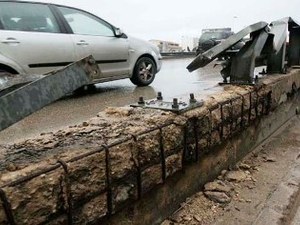 The Council of Development and Reconstruction began on Wednesday dismantling the metal bridge on the Jal el-Dib highway that links Beirut with the North after warnings the structure could collapse.

LBC TV network had reported that the dismantling of the bridge could take around 45 days.

The decision to remove the bridge was taken after a building collapsed in Ashrafiyeh’s Fassouh neighborhood, leaving 27 people dead and 12 others injured.

The collapse put the spotlight on the dismal state of old properties across the country and sparked widespread anger and accusations that authorities had failed to address the problem.

The head of parliament’s public works committee, MP Mohammed Qabbani, had warned that 20,000 buildings could face a fate similar to that of Fassouh.