85 Dead across Syria amid Fierce Clashes in Damascus Suburb 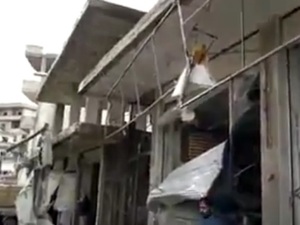 For its part, the Syrian Observatory for Human Rights said "at least eight civilians were killed by Syrian armed forces in several neighborhoods of Homs."

The Britain-based monitoring group added that the 15 regime soldiers were killed in fighting with rebel troops in the Bustan al-Diwan sector of the city.

Homs has become a flashpoint of the 10-month revolt against the regime of President Bashar al-Assad.

The Observatory said three civilians, including a woman and a child, were also killed by security forces in the Damascus region, while sniper fire gunned down a man overnight in Idlib, northwest Syria.

Syria's pro-regime al-Watan newspaper on Wednesday gave a rundown of dozens of deaths on the two sides in clashes in Homs and elsewhere in central Syria over the past two days.

Thirty-seven rebels were killed in the Adawiyeh, Bab Dreib and Dawar Fakhoura districts of Homs, it said.

Four soldiers were killed in an attack on a checkpoint in Bab Dreib, al-Watan said, while 15 rebels and two members of the security forces died in clashes in Rastan, another town in central Syria.

Analysts warn that the conflict, between a guerrilla movement backed by growing numbers of army deserters and a regime increasingly bent on repression, has largely eclipsed the peaceful protests seen at the start of the uprising.

"It is the beginning of an all-out armed conflict," said Joshua Landis, head of the Center for Middle East Studies at the University of Oklahoma.

"We are heading toward real chaos," he added. "The Syrian public in general is beginning to (realize) that there isn't a magic ending to this, there isn't a regime collapse."

On Tuesday, the Free Syrian Army said half of the country was now effectively a no-go zone for the security forces.

"Fifty percent of Syrian territory is no longer under the control of the regime," its Turkey-based commander Colonel Riad al-Asaad told Agence France Presse.

The United Nations says more than 5,400 people have been killed in Syria since the pro-democracy uprising began in mid-March.

But U.N. human rights chief Navi Pillay said on January 25 her organization had stopped compiling a death toll for Syria's crackdown on the protests because it is too difficult to get information.

Damascus does not recognize the scale of the protest movement that erupted in mid-March, insisting it is fighting "terrorist groups" seeking to sow chaos as part of a foreign-hatched conspiracy.

The Syrian Assad regime is paying for it's sins...

Joshua Landis says certain things on his own blog, then when he's interviewed by western media, his "views" suddenly change to reflect a belief that 100% of Syrians want Bashar out. What a cheap sell-out!

a fierce battle between arab syrian people and the farsi plan for the region.
it is the plan of cutting iranian fingers anywhere outside iran,and putting gangrena in the syrian finger is a major blow to the farsis, ... and now after the planned talks between karzai and taliban in saudi arabia..it will be the afghani finger..and dont forget the hamas palestinian arm cut from the torso.... next will be nouri el maliki than who??????

The rope is getting tighter on the Giraff's neck..If the revolt manages to knock on the doors of Damascus, Hamah will be next and immediately will witness the biggest volcano the regime will ever have...And that will bring our story to it's happy ending...bye bye Giraff...Bye Bye Fatso...Bye Bye to the rest of the Thugs

Bashar is struggling to survive in Damascus now. He is pulling forces from other areas to save the capital.

Russia can say good bye to the navy base and influence in Syria after the fall of the Ba'ath which is now 100% certain.

Look like civil war already started. Just like Ghaddafi, he prefers to leave a destroyed country behind him and not step down!

the beginning of the end... and hezb is surely making plans to take over lebanon...

Another prediction by the same "successful" predictor peace Tradamus. Why are allouchi, thepatriot, Gabby, shab, realist and Dr. Tahwaji competing with each other when all their predictions have for years proven to be...uh...blah...umm...duh...FALSE? Let's add "miss the " marc to the list of clairvoyants. Welcome to the club, marcush.

Maybe by the time the death toll reaches 10 000 - which might take no longer than month give or take given the daily increase of deaths- will the russians finally back the UNSC resolution to ask Assad to step down... Ridiculous...

the filthy zionist information hallucinate about civil war in lebanon and that our glorious resistance would take over lebanon.

this is how big their fears are.

I like Naharnet's use of the expression "fresh violence" as if the violence of previous days get recycled. Talking about a site run by idiots that caters to idiots who live in the fantasy world that that Naharnet and the other media outlets that spin in its universe invent and pump into the empty skulls of their dumb followers. Keep entertaining the rest of us, Naharnet. And it's OK to publish, once in a while, the comments of the rest of us that expose the stupidities of all of you.

The support for Bashar among Druze is not very deep and they are playing a more neutral role. The ones that matter for the regime to fall are the military, the rich and influential. It's obvious that more and more of the military are joining the revolution which is leading to more fighting and in turn to higher casualties.

The rich and powerful (that are not direct family, Alawite or too deep in the regime) will abandon supporting the current system once they realize the economy is drying up enough because they are interested in their own pockets and survival.

If the revolution drags on for too long, the government will have trouble paying their thugs and the military forces as well as they have in the past. The less money they are able to pay, the more likely it is for thugs and military forces to refuse to engage the rebels or to even switch sides.

Once the money dries up and the military members are abandoning in mass numbers for its own survival and personal interests then the regime will fall. Depends on how long the regime can keep funneling money to its supporters whether or not this will become a larger scale civil war or stay relatively small scale.

Once the people with guns abandon the rulers in large enough numbers and the rich and influential stop supporting or become neutral then the leaders are finished. This is how almost all revolutions work.

i love waking up to news like this just makes my day even better. let the fire rage on.