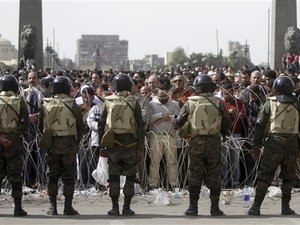 The trappings of a determined protest movement — chanting, flags and raised fists — fill Tahrir Square, the hard-won enclave of those who seek a new Egypt. But some there fear an enemy within.

The boldest challenge ever to President Hosni Mubarak's three decades of authoritarian rule has so far failed in its singular goal to oust him immediately. And after initial euphoria over their defiance of a state once thought impregnable, protesters are increasingly uneasy that Mubarak or leaders he has chosen may manage to hang on to power.

If they do, there is a growing fear that the entrenched regime will try to exact revenge in the way it has done so many times before — mass arrests and abuse of detainees.

Many in Tahrir Square, the epicenter of the protests in Cairo, have noticed some in their midst who look out of place. They hold mobile telephones aloft, recording video of the panorama. The protesters suspect these are undercover police documenting who is attending the protests and fear that if they don't win far-reaching concessions soon, an emboldened security establishment will identify and round them up, one by one.

"We've heard about plainclothes security milling about in the crowd," said Salih Abdul Aziz, 39, who first joined protests at the square on Jan. 28, a day of intense clashes with riot police. "We are careful in what we say to each other. And we don't talk politics very much to people we don't know."

For decades, Egyptians have endured brutality and corruption at the hands of police, and fear is a part of their fiber. A 30-year-old teacher who has met with government officials to discuss reforms said one of the protesters' main demands is the annulment of Egypt's repressive emergency laws, which the government has promised to lift eventually.

"This must happen. Otherwise we are not safe. We can be arrested anytime," said the teacher, who only gave her first name, Heba, for fear of government retribution.

The emergency laws expand police powers and sharply curtail rights to demonstrate and organize politically. The restrictions were imposed after the assassination of President Anwar Sadat in 1981, which led to Mubarak taking power.

A Human Rights Watch worker said she had heard of recent detentions involving "lower-level harassment" of people approaching Tahrir Square with blankets and other supplies, or for alleged violations of a nightly curfew.

"There are new reports every day," said rights activist Heba Morayef. "It's not all targeted."

The Arab Network for Human Rights Information, an Egyptian group, said a prominent Egyptian blogger has been missing since Sunday night.

Abdel Kareem Nabil disappeared after leaving Tahrir Square, said Gamal Eid, a group activist. Nabil was released in November after four years in jail for writings deemed insulting to Islam and for calling Mubarak "a symbol of tyranny."

Eid said his group has recorded around 40 people missing, and believed to be in detention, since Jan. 28. He said it was not a comprehensive list and that his group was still compiling data on missing people.

On Monday, the government freed Wael Ghonim, a Google Inc. executive who was behind a Facebook page that rallied support for the protest movement. The government has promised to release other detained protesters, though it has not commented on the numbers and location of people it is holding.

Talking to an Egyptian station, station Dream 2 TV, Ghonim described how he met the new head of the ruling National Democratic Party after his release and urged him to quit because his party was "rotten."

Though they have not reached their ultimate goal of pushing Mubarak out, two weeks of protests have already brought the most far-reaching concessions the regime has ever offered. Mubarak sacked his Cabinet and appointed a new one, including the first vice president he has ever designated. He promised he would not seek re-election later this year and the government also assured protesters his son Gamal would not run, as many had feared. The leadership of the ruling party was purged.

In addition, the new vice president, Omar Suleiman, offered to embark on a far-reaching set of reforms to include amending the constitution to provide for greater political freedoms and competition in elections for both parliament and the presidency.

However, many protesters are deeply mistrustful of those promises.

Ahmed Hosni, a 38-year-old disabled man, said he lost his leg to an accident in 2003 because when he was moved to a hospital, there was not enough equipment to treat his simple injury and he was left bleeding.

"We cannot leave the square because we don't trust the regime," he said. "For 30 years, we have been mistrusting the regime. If we leave, the police will come back."

Many just do not believe the government will deliver. They have heard similar promises before, but the changes never came to pass.

And they see a basic conundrum in the promises of reform: How can those who created an autocratic system, built on privileges for the few and the repression of many, be responsible for dismantling it?

Within the same week, the government made extraordinary pledges not to harass protesters and to investigate election fraud and official graft while hinting darkly at foreign influence in the protests.

That was a slap to a movement that, by most accounts, is homegrown even if it drew inspiration from the revolt in Tunisia, another North African Arab nation.

Suleiman, who has been managing the crisis, is just an extension of the problem for many denizens of Tahrir Square. They see the former intelligence chief and army general as an incarnation of his boss.

In this shifting landscape, it is hard for protesters to know whether they are winning or losing, whether the concessions amount to a real victory as long as the president of nearly three decades is still in his palace.

"What motivated me, and so many other people, was to make Mubarak go," said Ahmad Issam, a 31-year-old engineer in a suit and tie who came to protest in Tahrir Square after work. "Then the brainwashing attempts: the rumors, the media, showed that the regime hasn't changed."(AP)