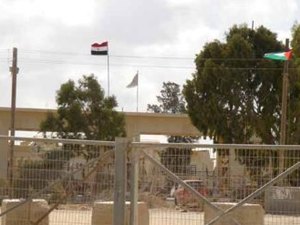 Immigration officers have been instructed to bar Palestinians from entering Egypt, an official at Cairo airport said on Wednesday after 12 travelers were sent back.

"There are instructions to stop Palestinians entering Egypt. Twelve Palestinians were sent back to the places they came from on Wednesday," the official told Agence France Presse, on condition of anonymity.

A second airport-based official told AFP that airlines had been told not to bring Palestinian passengers to Egypt.

Airline officials from Middle East Airlines (MEA) in Beirut and Royal Jordanian in Amman confirmed that they had been asked not to bring Palestinians into Egypt.

"We can confirm that we have received instruction that Palestinians will not be allowed into Egypt," the MEA source said, speaking on condition of anonymity as he was not authorized to brief the press.

"Our flight today has already taken off so, effective tomorrow morning, papers will be checked at the counter and Palestinians without another passport -- a different nationality -- will not be allowed to board."

An official at the Palestinian embassy in Cairo confirmed the ban but said he had been told it was a "temporary measure" and would not apply to those with Egyptian residency, diplomatic passports or who are married to Egyptians.

It was not clear who issued the order, as Egypt's deputy interior minister for information, Hamdi Abdel Karim, denied there had been any change in policy.

"There are no measures to that effect. If their paperwork is in order and sound, they can get in," he insisted.

Neither was it clear why Palestinians had been targeted.

Egypt is in the grip of a major political crisis, with tens of thousands of demonstrators on the streets calling for President Hosni Mubarak's overthrow -- protests which the state has attempted to blame on foreign agitators.

But security sources in northern Sinai told AFP that Palestinians living in the area were suspected last week of having blown up a gas pipeline. It was not clear if this was linked to the order.

The land border crossing at Rafah between Egypt and the Palestinian enclave of Gaza has been closed since the start of the unrest on January 25.