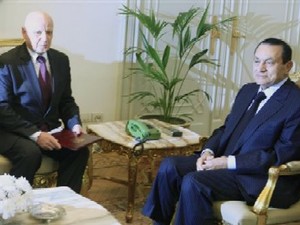 Mubarak met Alexander Sultanov, deputy Russian foreign minister and special Middle East envoy, at the presidential palace in Cairo, as thousands protested in the city's Tahrir Square and outside parliament.

State agency MENA reported the meeting but gave no details of the talks.

Russia has expressed concern over the situation in Egypt, where massive anti-regime protests have entered their third week, and called on the United Nations Security Council to send a mission to the region.

The Security Council has not visited the troubled Middle East for more than 30 years.

Russia's Foreign Minister Sergei Lavrov had previously said Egypt should resolve the political crisis through dialogue between Mubarak and his opponents, and has warned foreign powers not to issue "ultimatums" to the regime.

Mubarak's ties with Moscow stretch back decades. He spent two years training to become a fighter pilot in a Soviet military academy. Later, he worked to improve ties with the Kremlin despite his strong reliance on U.S. funding.

Sultanov is the second senior envoy that Mubarak has met since the crisis began. On Tuesday, he held talks with the Emirati Foreign Minister Sheikh Abdullah bin Zayed al-Nahyan.