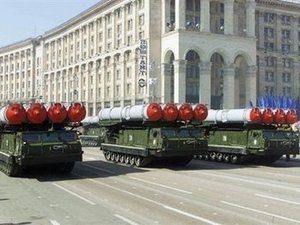 Russia is freezing a contract to deliver S-300 air defense missiles to Iran after the adoption of the new UN sanctions against Tehran, a Russian source told the Interfax news agency on Thursday.

"It is compulsory to fulfill a decision by the U.N. Security Council and Russia is not an exception here," said the source in the Federal Service for Military Technical Cooperation, which supervises Russian arms sales.

"Naturally, the contract for the delivery to Tehran of the S-300 air defense missile systems will be frozen," added the source, who was not named.

Russia several years ago agreed the deal on the S-300 missile systems but has never delivered the weapons amid pressure from the United States and Israel which fear they would dramatically improve Iran's defensive capabilities.

Its failure to deliver the missiles has disappointed Iran's Islamic leadership and become a major sticking point in once strong bilateral ties.

Konstantin Kosachev, head of the foreign affairs committee on Russia's lower house of parliament, meanwhile said that while weapons sales restrictions had been expanded under the sanctions they did not include the S-300s.

However it does not appear that the Security Council resolution makes a distinction between offensive and defensive heavy weaponry.

Moreover comments by the Russia's military-technical cooperation agency are closely watched as it is directly responsible for ensuring that Russia's arms sales fall in line with international law.(AFP)

WorldPoliticsUnited States of AmericaIsraelTehranRussia
Comments 0
Login to leave a comment