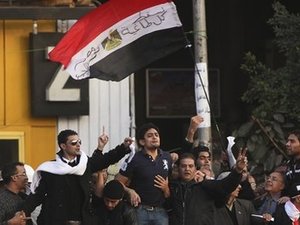 Wael Ghonim, a Google executive who emerged as a prominent voice of Egyptian protests against President Hosni Mubarak, promised on Thursday to stay out of politics once the dissidents' demands are met.

The 30-year-old was freed Monday after 12 days in custody, and was swiftly propelled to the forefront of the popular uprising, addressing huge crowds in Tahrir Square, the epicenter of the protests against Mubarak.

"I promise every Egyptian that I will go back to my normal life and not be involved in politics once Egyptians fulfill their dreams," he wrote on his Twitter account.

In an interview with CNN on Wednesday, Ghonim, Google's marketing chief for the Middle East and North Africa, said he was "ready to die" for the cause.

Ghonim appeared in an emotional interview on Egypt's Dream 2 television channel after his release, and his powerful reaction has become an Internet hit and a recruiting tool for a protest movement now entering its third week.

Some credited the interview with revitalizing protests against Mubarak, who has ruled for 30 years and, despite concessions to protesters, says he will not step down until his term expires in September.