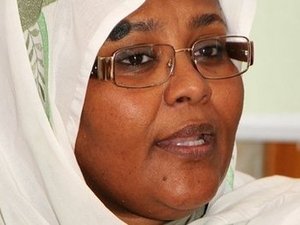 Mahdi was arrested as she went with a group of activists to petition the security forces for the release of protesters detained nearly two weeks ago, Habab Mubarak, the daughter of another leading Umma party member Mubarak al-Fadil, told Agence France Presse.

"The minute we stepped out of the car they arrested her," Mubarak said.

"They also violently grabbed the placards that we had in the back of the car showing pictures of those people who were detained on January 30," she added.

She said the incident took place after around 30 women, among them the mothers of those still being held after anti-government demonstrations last month, set off to present their petition to the head of the Sudan's National Intelligence and Security Services Mohammed Atta.

They had gathered at the home of Fadil and were just leaving when the security forces arrested Mariam al-Mahdi, daughter of Sadeq al-Mahdi, the premier Bashir overthrew.

"We are still waiting for full details of the casualties," said Philip Aguer, spokesman for the south's Sudan People’s Liberation Army (SPLA), adding that he feared the death toll would rise.

"The rebels launched their attacks on Wednesday at 1:00 pm (1000 GMT) killing four of our soldiers, but the army fought back and 12 of the attackers were killed," Aguer told AFP.(AFP-Naharnet)